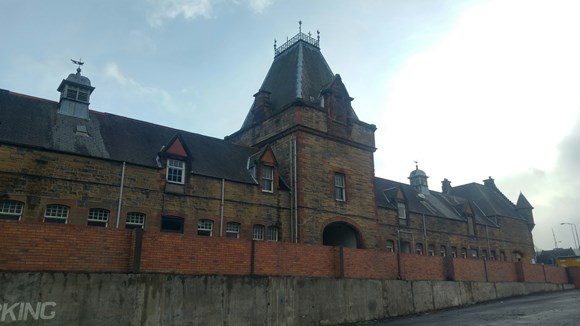 THE final phase of a project to transform a historic 19th century Edinburgh stable block into a work and events space is now underway.

The Powderhall Stables project, which is being delivered by the City of Edinburgh Council, will see a mix of individual studios and co-working spaces aimed at micro businesses delivered at the Broughton site.

The redeveloped facility will feature two flexible function spaces with kitchen areas, alongside the former stabling yard to the rear of the building being turned into a new plaza. The local authority anticipates that the facility will open in early 2022, with it preparing to seek expressions of interest from potential oeprators.

The refurbishment of the building has been designed by the award-winning practice Collective Architecture, supported by a design team including Currie & Brown, David Narro Associates, and RSP Consulting Engineers.

Following completion of a package of enabling works by Chamic Industrial Services, the main contract will be delivered by the construction services provider Sharkey, which has a ‘strong’ track record of delivering heritage projects in Edinburgh including the overhaul of the historic Dalry Swim Centre.

The project forms part of the wider council-led regeneration of the old Powderhall Waste Transfer Station and adjoining former bowling greens. The wider development will deliver over 200 homes and an Early Learning and Childcare Centre, along with new green spaces and enhanced public realm, including improvements to St. Mark’s Path and two new squares.

The local authority explained that the refurbishment of Powderhall Stables has been made possible by support from the Scottish Government’s Regeneration Capital Grant Fund along with Miller Homes’ Bonnington Micro Business Fund.

Councillor Kate Campbell, the City of Edinburgh Council’s housing, homelessness, and fair work convener, said, “We’ve been talking about the potential of the stables block at Powderhall for a long time – it’s so good that work is now starting, and we’ll see it back in use as a cornerstone of the whole development.

“The community were very involved in shaping these plans and telling us what they needed from the development. So, it’s fantastic that this amazing building will be available next year, supporting jobs by providing affordable work space for small businesses and local people, alongside creating a flexible space for the community to use.

“It’s part of our wider regeneration of this site, delivering new affordable homes and facilities that will benefit the whole community.”

The Scottish Government’s community wealth minister, Tom Arthur, added, “This is a great project which will restore the previously abandoned category B-listed former stable block, transform it into a modern work and events space and provide the local community with new places to work, learn and socialise. This project has been made possible by £1.4 million investment from the Regeneration Capital Grant Fund, with local community involvement in progressing the plans.

“The fund is playing a vital role, helping reinvigorate local communities and town centres by investing in projects that provide jobs and support local businesses. We are committed to seizing Scotland’s economic potential, creating secure, sustainable and satisfying jobs and supporting businesses recover from the Coronavirus pandemic. As part of that work, we are continuing to empower local people to invest in their communities’ future.”

Mark Halliday, contracts director for Sharkey, commented, |We are delighted to be involved in delivering a restoration project that will repair, protect and enhance the heritage of one of Edinburgh’s valued public buildings. We very much look forward to working in collaboration with the rest of the project team and to sharing our skills and experience on this exciting regeneration project.”