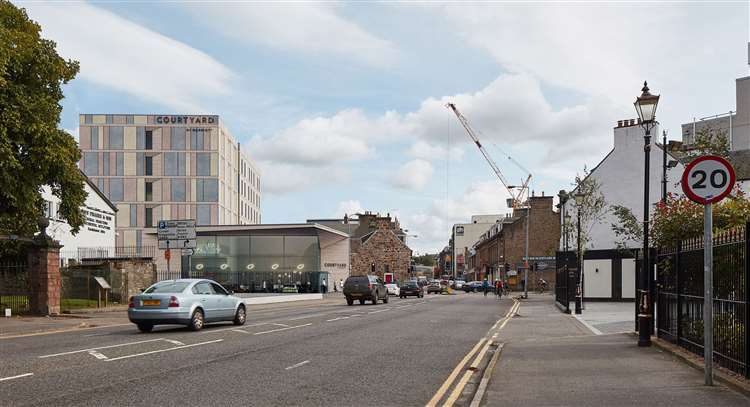 THE Highland Council has unanimously refused a planning application for the build of a six-storey, 162-room hotel in Inverness city centre.

The application from Bricks Capital would have seen the demolition of the Iron Works music venue and build of the hotel in its place. The original plans said that some 90 construction jobs would’ve been created as a result of the project.

The local authority gave the following reasoning for rejecting the plans: “The development, if implemented, would have a significant adverse impact on the character and appearance of the Inverness (Riverside) Conservation Area and three adjacent Listed Buildings and their settings – Dunbar’s Hospital; former Farraline Park School and the Old High Church – by virtue of the scale, mass and design of the hotel and would fail to demonstrate sensitive siting and high quality design in keeping with local character and the historic environment and in making use of appropriate materials.

“The development would also fail to make a positive contribution to the architectural and visual quality of the place in which it would be located; and would have an unacceptable impact on built heritage resources, contrary to Policies 28 (Sustainable design); 29 (Design Quality & Place-making); and 57 (Natural, Built and Cultural Heritage) of the Highland-wide Local Development Plan 2013, as well as the relevant provisions of the Inverness City Centre Development Brief Supplementary Guidance as they relate to this site.

“The development, if implemented, would fail to comply with the key placemaking principles for new development as set out in the Inverness City Centre Development Brief 2018, in that the scale, mass and design of the development would have an adverse impact on key views to Old High Church, Church Lane and the setting of other historic buildings in the vicinity of the site; would fail to safeguard the setting of the built heritage and retain the character and distinctiveness of heritage assets; and the height, scale and massing of the development would not be in keeping with the predominant pattern of the adjacent historic urban fabric.”