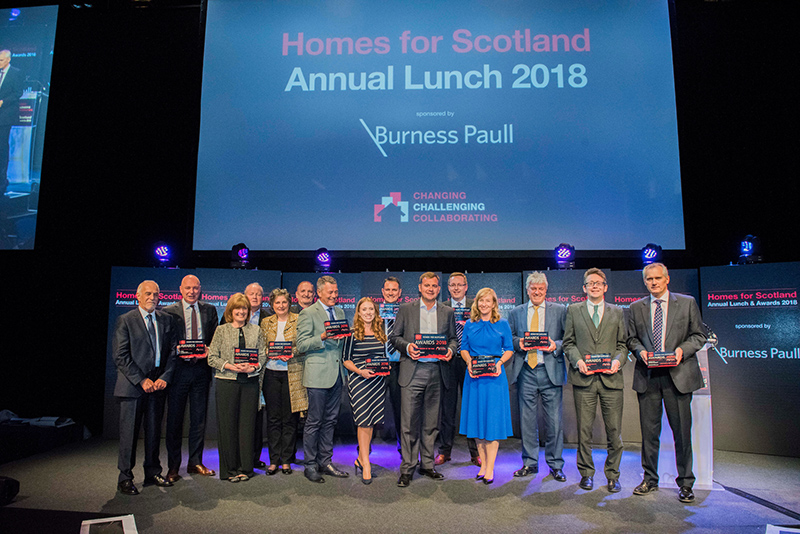 MILLER Homes took the top spot at the annual Homes for Scotland awards recently, scooping Home Builder of the Year.

Miller was crowned Home Builder of the Year as a result of its shortlisting of three different projects, going on to win an award for innovation for its online home purchasing tool and receiving a commendation in the Private Development category for Varcity North in Edinburgh. Judges also noted the “commitment and enthusiasm demonstrated by the Miller team during the site visit and interview stage”.

Stewart Milne Homes was recognised in the Private Development of the Year (Large) category for its Regency Place development in Aberdeen. Located in Countesswells, the new community features a collection of two, three, four and five-bedroom homes.

John Low, managing director at Stewart Milne Homes, said, “We’re very proud to have been recognised and awarded Private Development of the Year (Large) award at the Homes for Scotland Awards. Winning such a prestigious accolade is a real testament to our award-winning team who took great care and consideration in the design of the new community at Countesswells.”

David Wilson Homes walked away with the gong for Private Development of the Year (Medium) for its flagship Botanics development in the west end of Glasgow. The category rewards private developments that host 26-99 units, with judges considering the placemaking elements of the development, architectural design quality, commercial success and the impact the development has had on key stakeholders, the supply chain and the industry.

“It is exemplary in design, management and build quality, which is why we considered it a worthy entry for the Private Development of the Year award and we were thrilled that it has been crowned the winner.”

He added, “The finishing of the homes, apartments and the development itself is of the highest quality. This ha been recognised previously with the site management team being recognised with two national award wins at the NHBC Pride in the Job awards.

Andy Mitchell, chair of the independent judging panel and former land director at CALA Homes commented, “My fellow judges and I were hugely impressed by the standard of entries this year, with the shortlisted submissions really brought to life by the people behind them – whether that be the site managers, graduates or apprentices that greeted us during the visits to the shortlisted developments or the senior management teams who demonstrated such passion during interview.

“With the pride and professionalism of all involved so evident, the bar was set to the highest level, and all those on the shortlist were within touching distance of an award. I therefore congratulate all of this year’s finalists and celebrate their achievements in working to ensure Scotland has more of the homes it desperately needs right across the country.”

Private Development of the Year – Small (up to 25 units)

Affordable Development of the Year

Supporting Organisation of the Year

Home Builder of the Year