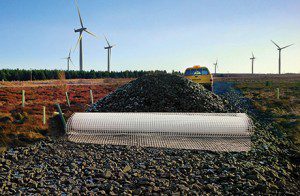 A geosynthetic reinforcement system from NAUE has been used to construct and strengthen more than 13km of ‘floating’ access roads over deep peat at Black Law Wind Farm Extension Phase 1.

When opened in 2005, the Black Law Wind Farm in Lanarkshire was the largest operating windfarm in the UK with 54 turbines and a total capacity of 124.2 megawatts (MW).

As the first phase of a two-part extension programme, ScottishPower Renewables is adding a further 23 turbines to the north of the wind farm which will increase the sites output capacity by up to 39MW.

Built on a redundant opencast coal mine, which had been restored to shallow wetlands and forestry, the vast majority of the Black Law site is underlain with mine workings and has large coverings of blanket peat bog at depths up to 4.5m.

Furthermore, beneath most of the peat covering is a very soft seam of clay. These low bearing soil conditions, with CBR values as low as 0.5%, were a major concern when designing unbound access roads at the site.

The challenge was to design and construct unbound access roads which could cope with 4000 repeated passes of articulated dump trucks with 15t axle loads, as well as being able to withstand the massive weight of turbine component delivery vehicles.

The solution to use a ‘floating road’ construction for the 13km of access roads, took into consideration all site constraints as well as the requirement to achieve an allowable maximum rut depth of 75mm for the life of the access roads.

For the majority of the road build, a combination reinforcement system of NAUE Combigrid 40/40 Q1 151 GRK3 and Secugrid 40/40 Q1 was selected to provide permanent stability and bearing capacity for the crushed gravel/stone base.

Above the Combigrid an aggregate base layer is installed, onto which Secugrid 40/40 Q1 is then laid, followed by an aggregate cover layer.

Both products are designed to provide high strength, at low strains, and be resistant to chemical and biological attack.

The combination of Combigrid and Secugrid proved a winner, allowing the floating road construction to stay on track whilst accomplishing the necessary long-term bearing capacity for the site’s access roads.