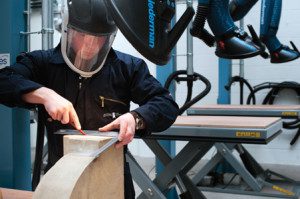 HAVING left his job as a civil engineer, Craig Derrick is now one of 34 stonemasonry apprentices training with Historic Scotland at Forth Valley College. Swapping his desktop for a workshop and Microsoft Office Tools for a toolbox of mallets, chisels, trowels and pointers, Craig is currently in his third year of a four-year apprenticeship.

The students, a mix of private sector employees working through CITB and Historic Scotland apprentices, will train both in college and onsite on listed buildings, war monuments, cathedrals and historic landmarks, such as Edinburgh Castle.

The Forth Valley facility, established four-years ago following the success of Historic Scotland’s Elgin training centre, which has been running for the last 15 years, provides a Central Belt Scottish location for young men and women looking to train with Historic Scotland in traditional craft skills and work in building conservation.

Working with the Scottish Government, Historic Scotland, who normally take on six to eight apprentices each year, committed to training an additional 30 apprentices over the last three years to help tackle skills shortages and youth unemployment. Training 53 apprentices across the country, the students are predominantly stonemasons but the organisation’s apprentices also include joiners, electricians, gardeners and painter and decorators.

“There is a huge need for more maintenance to be carried out on traditional buildings. When we’re talking about traditional building stock we tend to talk about pre 1919 buildings, of which there is near enough half a million in Scotland; and only six per cent of them are listed buildings, the rest don’t have any level of protection.”

Although employed by Historic Scotland, the teaching staff are fully integrated within Forth Valley College and the apprentices have full access to the college’s amenities, including IT facilities and learning support. As well as receiving their full training and SQA qualifications, the students can also sit their final stonemasonry skills test in-house, with the exam further offered to apprentices training outside of Historic Scotland and Forth Valley College.

Although the apprentices’ training is largely focused on traditional craft skills for historic buildings, the students also learn modern construction methods to provide comprehensive training and further their breadth of opportunities after the course.

Many of Historic Scotland’s former apprentices have continued to work for the organisation whilst others have moved into the private sector or established their own firms.

Yet, as Ian points out, regardless of the apprentices’ career paths, Historic Scotland is creating new generations of industry standard traditional craftsmen with the knowledge and skill to maintain Scotland’s traditionally built environment.

And as the construction industry begins to recover from its recessional slump and demand increases, Ian believes apprenticeships are becoming more and more appealing to younger generations. “People want to be able to use their hands and actually create stuff,” he added.

“In the past everyone wanted to go to university rather than coming down the vocational route. The industry’s done a lot to improve the image and create a career path of moving out from being a tradesperson to work in supervision, site management and moving on. The colleges and the SQA have done a lot to allow that progression; it’s never been easier for people to come in, to learn a trade, but also to move on out of that trade by doing additional qualifications.

“Stonemasonry is probably one of the oldest trades that we have. You see stone that’s built into historic buildings and it could be there for another 400 or 500 years. We’ve had apprentices here who have been working on parts of Stirling Castle over the last couple of years. The pieces of stone they’ve been replacing have been there for 500 or 600 years and now they’ll be there in another 500 years time.”

This year Historic Scotland hopes to undertake a major refurbishment of their original Elgin training facility and add 200m2 of additional workshop space to their Forth Valley site. The two current workshops at Forth Valley College, spacious, high ceilinged and well lit with large skylights, are more like modern artists’ studio spaces than traditional trade workshops. One room, brimming with pallets stacked high with stone and slab, traditional chimneys, wheelbarrows, toolkits and mortar buckets, is lined with stone walls and brick structures used for practical construction and maintenance work.

The other workshop, more of a stonemasons’ classroom, has rows of individual mechanised workbenches, each equipped with the latest high-end tools and ventilation pipes to extract excess dust.

Jamie Love, a third year stonemasonry apprentice at Forth Valley College, who works with FBM Contracts, is from nearby Raploch and has now worked on Roseburn House in Edinburgh, Scottish war memorials and a range of listed buildings since joining the course following a trial week three years ago.

“I love it, it’s brilliant. You get to see a lot of different things and because of the type of job you’re not always just doing the same thing: you can be cutting or building and it’s good to get a wee variety,” he said.

Training alongside Jamie is Craig Derrick. Largely based in St Andrews, Craig started the apprenticeship after moving from his previous job as a civil engineer.

“I used to work in an office doing civil engineering but I just didn’t like sitting inside a lot,” he explained. “I didn’t know a great deal about it when I applied but I just came along and I really enjoyed it.

“I enjoy being out and about and working outside a lot. You start to appreciate what’s around you more now that you know it’s there. You wander about and you’re like: ‘oh I’ve cut that, I can cut that, I’ve cut that’.

“Even a couple of my mates have picked up on it after I’ve told them things” added Jamie.

“They send us photos saying, ‘is this the kind of stuff you’re working on at college?’ It’s pretty cool.”

Outwith their apprenticeship schemes, Historic Scotland is also developing a new education and training centre for building conservation and traditional craft skills. Located in Forthside, Stirling, the Engine Shed will act as a central hub for the organisation’s work across Scotland. As well as being a centre for those in the industry – professionals and trades people from a range of sectors including heritage, construction, education and training to enhance their skills – the Engine Shed will also be a creative and inspiring space for local people and visitors to get involved with conservation through activities, exhibitions and events.

Giving younger generations an insight into building conservation through practical exercises and demonstrations, the centre will also help educate the public and homeowners on building maintenance, materials and repairs.

By raising conservation awareness with homeowners, Historic Scotland hope proprietors will be more confident engaging with contractors and professionals to carry out the necessary work when it’s needed.

The centre will also allow stonemasons like Jamie and Craig to speak to the public about the work they do and inform and inspire future generations looking for an insight into the industry.

Last year Historic Scotland, also launched a pilot Traditional Building Health Check scheme in Stirling. The initiative, inspired by similar programmes in the Netherlands, will work with homeowners to provide a comprehensive report on the maintenance work buildings require.

Backed by Scotland’s Minister for Culture, Europe and External Affairs, Fiona Hyslop, the scheme will create a chain of communication between industry bodies like Historic Scotland, construction and conservation professionals, homeowners and the general public.

Following the success and popularity of Historic Scotland’s stonemasonry apprenticeships, the organisation is hoping to further expand the range and size of the other craft skills apprenticeships they offer.

With the Engine Shed, new generations of industry standard traditional craftsmen  in training and onsite and schemes such as the Traditional Building Health Check, Historic Scotland is progressively maintaining and raising awareness of Scotland’s traditional buildings.

Yet, with around half a million historic buildings in Scotland, these developments remain part of an ongoing process throughout the country.

Only with more programmes like the stonemasonry apprenticeships will Scotland’s youth unemployment and skills shortages fall.