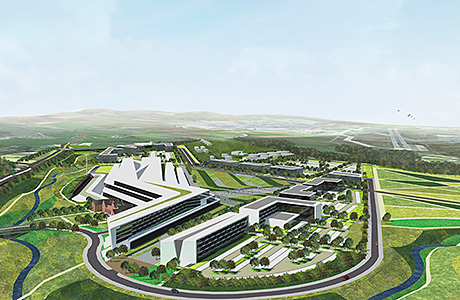 Henry Boot Developments – Aberdeen City Council’s development partner for the project – has launched the second round of public consultation events on plans for a new exhibition centre at Bucksburn and the redevelopment of the current AECC site at Bridge of Don.
Fresh artists’ impressions of the interior and exterior of the new event centre reveal the progress made by the development team since the first consultation exercise in May; while proposals for a mixed-use development at the Bridge of Don site now include two residential-led options based on the feedback received from consultees to date.
A green energy centre which would provide enough power for the new AECC and potentially the wider area is proposed for the Bucksburn site, along with the new multi-use exhibition and conference centre, a 200-bed four-star hotel, parking, and parkland.
The first option for the Bridge of Don site incorporates business and retail space, while the second proposes a household waste recycling centre.
Both options retain residential development and an enhanced 1,000 space Park and Ride – with all participants this time round being asked to state their preference.
More than 1,000 people took part in the first phase of public consultation.