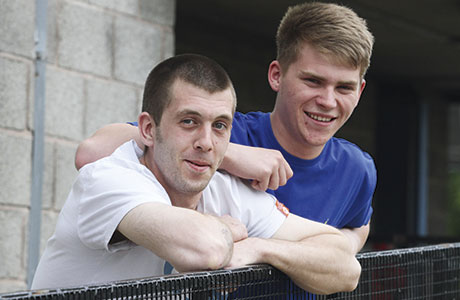 TWO of the first graduates from CITB Scotland’s prevocational work experience programme have seen their construction skills recognised, after scooping two of the top awards at Dundee and Angus College’s Dundee Campus annual prize-giving event.
Carpentry and joinery apprentice, Ross McDonald (24) won the Glenalmond Timber Prize – Best Craft Apprentice Machine Woodworking, while Dean Simpson (19), also an apprentice joiner, was named Howdens Best Improved 1st Year Apprentice.
After learning of the opportunity during his first stint at college, Ross took part in a CITB Scotland work placement at the Dundee branch of specialist building services contractor, McGill, and, following six weeks hard work, was rewarded with a full-time carpentry and joinery apprentice role with the company.
Dean, meanwhile, was given a placement with bespoke joinery manufacturer and interior fit out specialist, Bentleys (Shopfitting) Ltd, before impressing enough to earn himself an apprenticeship with the Balgray-based business.
During their placements, which were some of the first in Scotland, Ross and Dean were given the chance to gain invaluable on-site experience and demonstrate their work ethic and commitment to their would-be employers.
Ross is now embarking on an adult two-year apprenticeship, while Dean is on the four- year apprenticeship, incorporating both on-site and college-based learning.
CITB Scotland’s prevocational programme is being led by work placement coordinator, Kim Scanlin, who has been rolling the scheme out across the country.
Kim sources opportunities for students to go on four or six week placements to see if they are suited to a career in the industry.
Since the programme’s inception, over 230 students have been placed with Scottish businesses, with nearly 40 placements in Dundee and Angus.