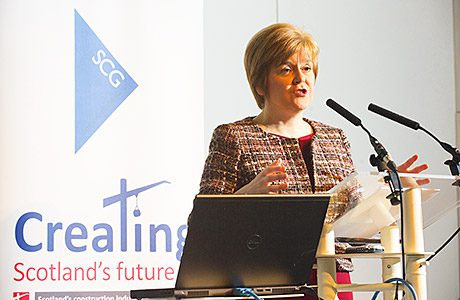 DEPUTY First Mininster Nicola Sturgeon was among the speakers at the launch of the Scottish Contractors’ Group (SCG) Creating Scotland’s Future campaign.

The campaign highlights the capability of the Scottish construction sector, and the value of construction investment in creating jobs and growth.
Guests at the Edinburgh launch learned construction projects will boost the Scottish economy – with every £1 spent on construction generating £2.84 of wider economic activity.
The Scottish construction economy is starting to show signs of recovery following a difficult downturn. Scottish Government data shows construction output grew by 0.7% in the third quarter of 2013 and by 2.8% compared to same period in 2012. However while project starts in Scotland increased by 3.5% last year, this lagged behind the UK as a whole.
Nicola Sturgeon spoke about the Scottish Government’s work with the sector and showed appreciation of the positives and challenges faced by the industry.
Other speakers at the event included Ken Gillespie, Construction Division Chief Executive for Morrison Construction and SCG Chair and Brendan Dick, Director, BT Scotland & Deputy Chair, SCDI. Ken Gillespie said, “Construction already makes a valuable contribution to the Scottish economy and our campaign seeks to build on this investment and create jobs and growth.”
In other news, a new poll has revealed the public have named investment in infrastructure as the best way of boosting the Scottish economy. The poll, commissioned by the Scottish Building Federation, found that investment in infrastructure emerged as the general public’s top priority, beating categories including improved childcare, continuing free access to higher education and reducing the proportion of energy Scotland imports from abroad.
SBF Managing Director Vaughan Hart said, “This demonstrates public support for investment in infrastructure as a key plank of a successful strategy for Scotland’s long-term economic recovery. Over the last few years, Scottish ministers have shown they are in tune with public thinking by prioritising capital spending, even at a time when public budgets have been under considerable pressure. As the economy shows promising signs of recovery, sustaining investment in core infrastructure will help ensure the long term sustainability of that recovery. Crucially, it will also support skills and employment in the construction industry.”