THE final tracks have been laid in Edinburgh’s trams to Newhaven project to connect the capital’s existing tram system to the new line.

Passenger services are set to begin on the new line next spring, with the final section of rail having been laid at Picardy Place marking the completion of all main infrastructure works.

Finishing touches are now being carried out on the £207.3 million project, including the removal of most of the fencing and filling excavations around the lamppost columns in Leith Walk before sites close for Christmas.

Leith Walk was originally anticipated to return to two-way traffic this week, however the City of Edinburgh Council said that recent freezing weather has impacted the necessary surfacing and paving works, as well as concrete as supply issues. As a result, it said two-way traffic is expected to be introduced to the length of the street in January. 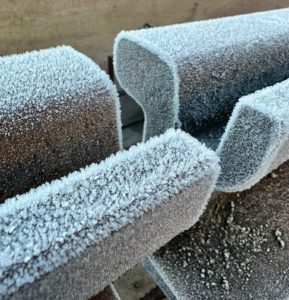 Councillor Scott Arthur, transport and environment convener, said, “This is a landmark moment in the Trams to Newhaven project – we now have a continuous line running from the airport to Newhaven, which will be carrying passengers in a matter of months.

“As we near completion the route is really taking shape – it will truly transform travel to the north of the city and boost the local economy. Not only will the tram provide a high capacity, sustainable form of transport for thousands each day, but improvements to the streetscape will create much more welcoming spaces for people walking, wheeling and spending time along the route.

“The project team has worked extremely hard to get to this stage, despite the Covid pandemic and industry-wide issues with labour and materials. While recent freezing weather has regretfully had a slight impact on plans, the majority of infrastructure work is complete, and the project remains on schedule for delivery on time and in budget by spring 2023.

“I’d like to thank all those living and working near their route for their patience. I look forward to delivering a tram service to your doorstep in the near future, and to the benefits it will bring you and the wider city.”