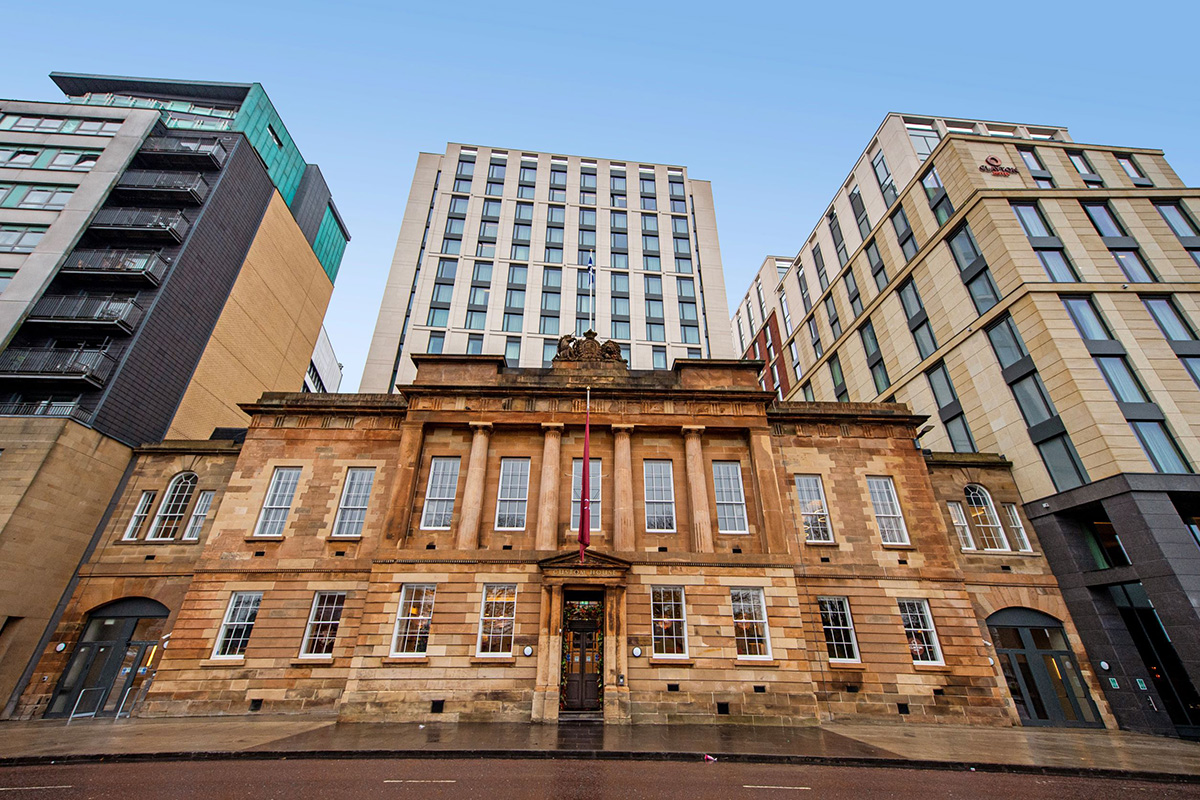 The historic sandstone building, with its Greek revival frontage, now forms a centrepiece for a new hotel quarter bringing together a 303-bed four-star Clayton Hotel and a 164-bed Adagio Aparthotel.

The four-year redevelopment project – working in partnership with the two hotel groups and contractor McAleer & Rushe and pre-sold to German pension fund Union GMB – has re-established the bond between the River Clyde and Glasgow’s commercial heartland.

For more than 180 years, Custom House provided a direct link from the quayside to the city centre, originally standing as an entry point for traders to pay taxes prior to bringing goods into the city from the river. The building underwent internal modifications in 1873, carried out by architect Alexander ‘Greek’ Thomson.

Having lain empty for more than a decade, Custom House, together with neighbouring buildings, had fallen into disrepair and was placed on Scotland’s Buildings at Risk Register.  The semi-derelict gap site was purchased by Artisan in 2017 and now the newly renovated Custom House opens its doors as the main entrance to the Clayton Hotel.

Jaco Jansen, Artisan’s CEO, said, “This has been a quite remarkable transformation of a forgotten and untended waterside gap-site into a vibrant hotel quarter restoring the direct link between the bustling heart of Glasgow’s city centre and the River Clyde.

“The two new hotels serve different, yet complementary ends of the market bringing more than 460 new hotel rooms to Glasgow as well as creating some 200 full time jobs, sending out a powerful statement of intent that the city centre is, once again, open for business.

“At its heart is the fully restored Custom House building itself, now providing a grand entrance hall and accessible social spaces open to the public. Fittingly, the Greek Doric arches either side of the main building where, traditionally, horses and carriages would pass having settled their taxes, now stand restored and rejuvenated, becoming a pertinent symbol of the renewed connectivity inspired by the regeneration.”

In 2018, An Adagio Aparthotel was created behind the façade of a listed building overlooking Edinburgh’s Royal Mile, as part of Artisan’s New Waverley development. And earlier this year, a Clayton Hotel was opened within the Victorian Everards Printworks building in Bristol’s Old City.

Artisan’s outgoing development director, Clive Wilding, added, “Artisan now has a proven track record in preserving listed buildings within developments, bringing them back to life and creatively adapting them, in a sustainable way, to their new environments at the heart of new hotel-based quarters. What knits all these ground-breaking projects together is our drive to regenerate forgotten city locations, reconnecting them to the rest of the city with increased pedestrian footfall and outstanding public realm provision.

“By opening hotels in these historic buildings, we are carefully blending the old with the new, sustainably retaining and reusing the historic facades whilst introducing a contemporary mix of accommodation, restaurants, cafes and bars to provide 24/7 activity right at the heart of our city centres. Having helped Artisan deliver these superb, lasting projects, I feel the time is now right for me to exit the business following 50 years in the industry. And hopefully others will respect and follow this legacy and continue to undertake enlightened regeneration of our fragile and sensitive city centres with placemaking and sustainability at its core.”