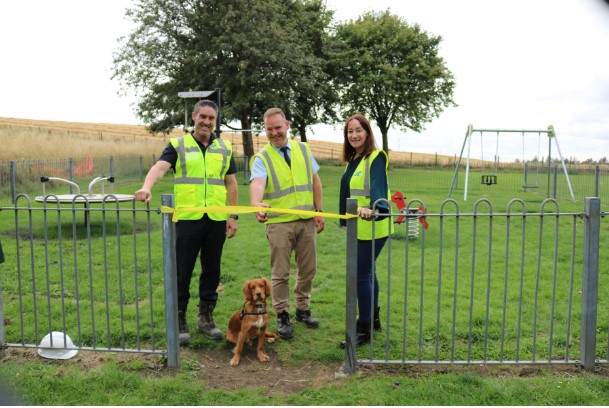 THE JR Group has officially handed over an upgraded play park project for a local Kirkcaldy community as part of its new homes site in Glen Albyn for Fife Housing Group.

Fife Housing Group and The JR Group, who are working in partnership to deliver 49 new homes in the area, agreed to revamp a local park as part of the community benefits and planning requirements for the project, in an effort to preserve the natural environment around the new development.

Usually, additional commitments such as these are completed towards the end of the construction phase, however, both organisations were keen to give local children the opportunity to enjoy the park over the summer months and decided to accelerate the upgrade, installing four new pieces of equipment and finishing the project in early August.

Gayle O’Hear said, “Investing in the communities in which we are building is at the very core of our business, so we were delighted to support the community at Glen Albyn with the upgrade of the play park and working with the team at Fife Housing Group to bring the activity forward to ensure the community could benefit from it during the summer months.”

Douglas Smith added, “It’s terrific we were able to bring the construction of the new play park forward and it’s really nice being able to give the local kids some new play equipment that they can enjoy for years to come.”

Due to be completed in spring 2023, the development itself is part-funded by the Scottish Government.