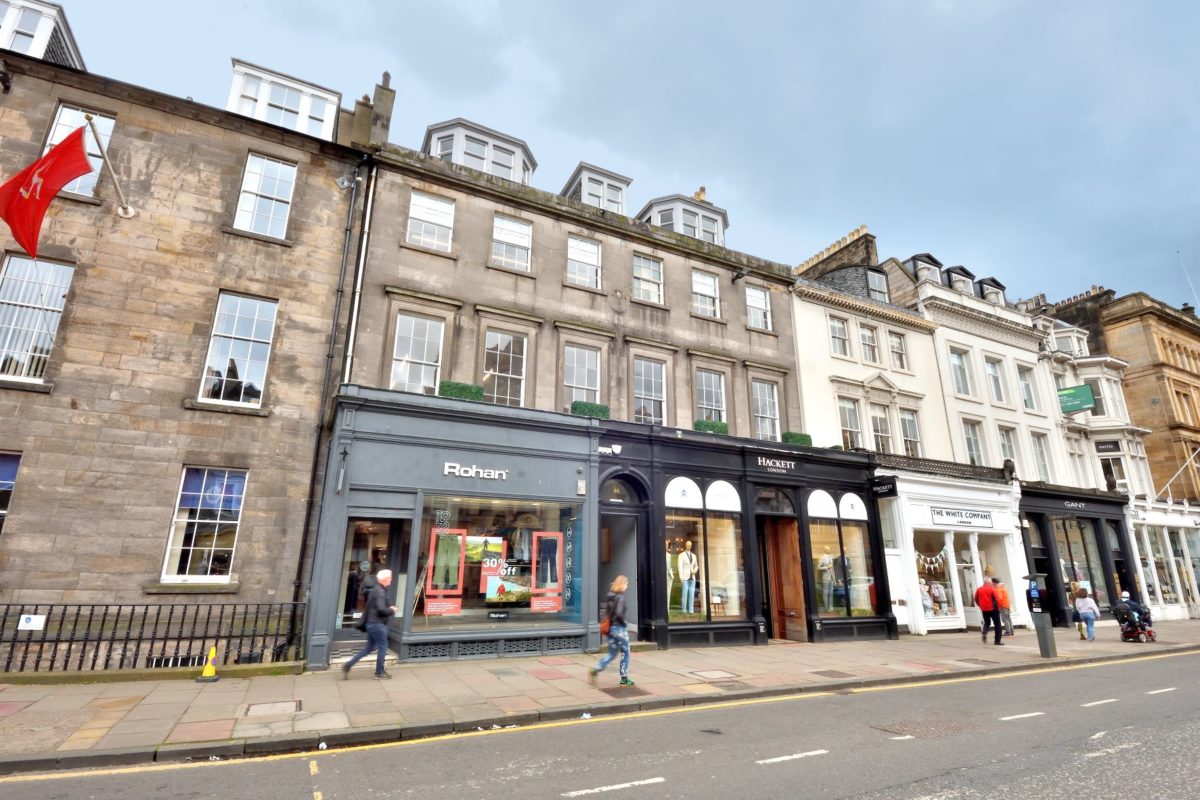 THREE prominent retail and office buildings on Edinburgh’s George Street have been sold in a multi-million pound deal.

Broadlands Properties has acquired 86, 88, and 90-92 George Street from a client of CBRE Investment Management, with the deal brokered between commercial property consultancy Knight Frank and CuthbertWhite. The properties were marketed for around £15 million.

Hackett, outdoor clothing company Rohan, menswear retailer Xile, The White Company, and Gant operate from the ground floor units of the properties, totalling more than 17,800 sq. ft. of retail space. The offices above are occupied by architecture practice Kettle Collective, Grayling Capital, and fintech company Praemium among other firms.

The deal also includes two adjoining buildings, 72 and 74 Rose Street North Lane, which were marketed for redevelopment. The former is currently vacant, while the latter is partially occupied by a firm of solicitors.

Knight Frank said interest in George Street has ‘defied concerns’ about the health of the retail sector. Earlier this year, research from the consultancy found that, prior to the opening of St James Quarter, Edinburgh had the most productive retail space of any UK city outside of London, with a ‘sales density’ of £665 per sq. ft. against a UK average of £329 per sq. ft.

Euan Kelly, partner at Knight Frank, said, “There was a high level of interest in the George Street assets, despite the well publicised challenges the retail sector has faced in recent years. They were originally marketed as four separate properties, but it says a lot about the buyer’s confidence in Edinburgh retail that they have decided to acquire all of them together.

“Edinburgh city centre has strong fundamentals from both a retail and office perspective, with limited supply and a sustained high level of demand. There is an argument to be made that sentiment towards bricks and mortar retail had swung too far in one direction during the heights of the Covid-19 pandemic, but it is beginning to come back and George Street in particular has held up better than many people would have thought.”

Stephen Kay of CuthbertWhite added, “Broadland Properties Ltd is a family run office with existing holdings on George St. The company sees long-term value in this location and is planning a comprehensive refurbishment of the asset to make it even more appealing to occupiers. Many of the current retail occupiers have been in occupation for in-excess of 25 years and will be assisting with the ongoing letting strategy of the soon-to-be refurbished office accommodation.”