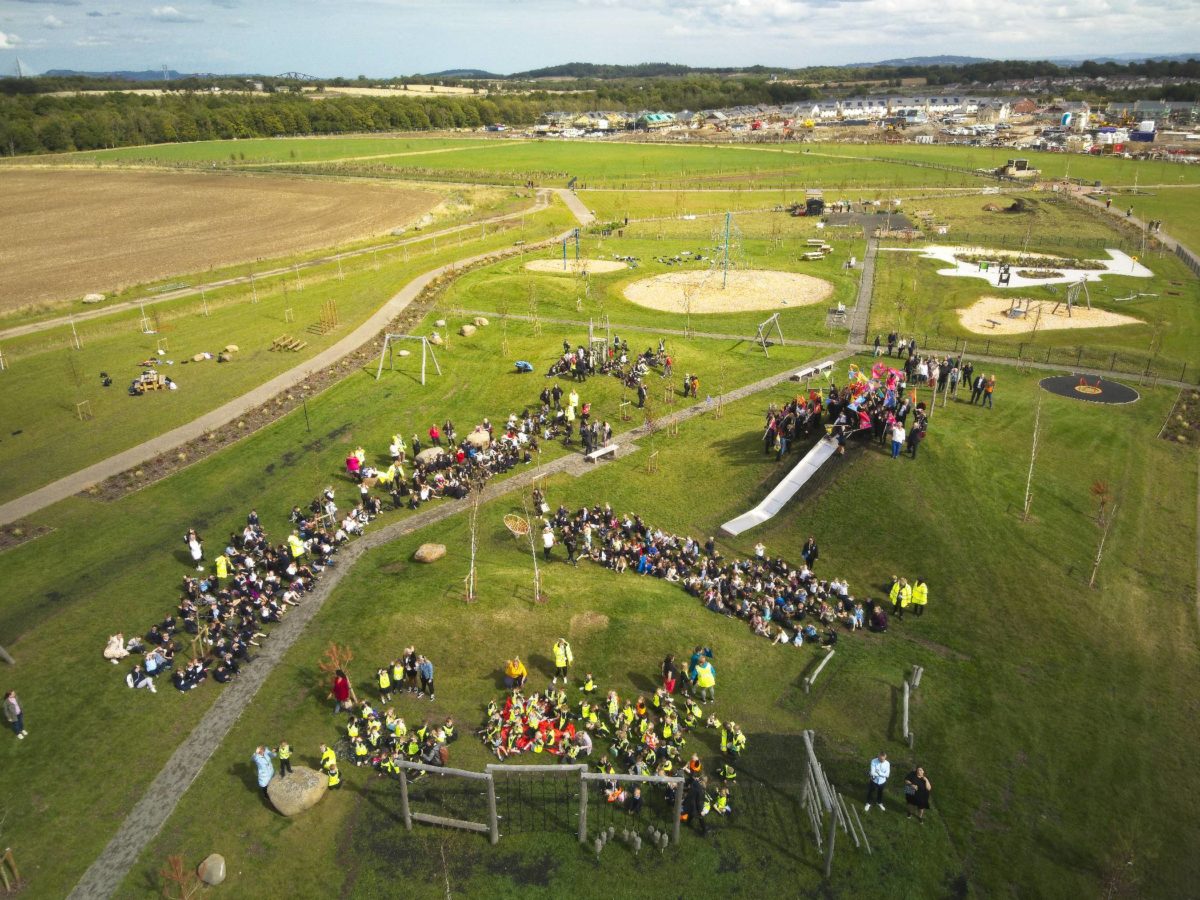 OVER 500 local children have marked the official opening of the Auldcathie Playpark in Winchburgh.

Accompanied by local piper Rab Reid, 53 pupils from the new Winchburgh Academy marched with flags and attended a ceremony where John Hamilton, chief executive of Winchburgh Developments, handed over the park to the children who had designed it.

The youngsters staked their ‘claim’ on the park with a flag placed on top of the tallest slide mound.

Fiona Hyslop, MSP for Linlithgow, joined the celebrations by holding the ribbon as Winchburgh Primary pupil Elodie Harris flew down the fly fox. She said, “The Auldcathie Playpark is such a great addition to the village and the development of Winchburgh. Designed by the children who came together to claim the park for the children of the village, their piped parade from Winchburgh Academy, with their personally designed flags, is a memory I will carry for a long time.

“The joy and happiness and energy of the hundreds of Winchburgh children exploring this very big space of their own brand-new play area and play apparatus was very evident. It was a pleasure to join them and speak to them as part of the ‘opening claiming ceremony’ on this very special day. Thank you to the developers, park designers and engineers for building this very special place which will form a new heart to this growing village.”

John Hamilton, chief executive of Winchburgh Developments Ltd, added, “It is fantastic to have the first phase of the Auldcathie development finally complete and marked with such a joyous occasion for the children of Winchburgh. The children have now claimed the playpark they designed, and we look forward to providing the next phase with more space for them to enjoy.”

The Auldcathie Playpark has received an investment of £300,000 from Winchburgh Developments and was designed by local children, pre-covid. It consists of over 100 metres of play facilities, with a sandpit and sensory areas for toddlers and young children, and adventure play areas for teenagers. The most requested equipment includes a witch’s hat climbing frame, a 50-metre fly fox, and a large slide.

Ian Harvey, headteacher at Winchburgh Primary, commented, “We were delighted to attend the official opening of Auldcathie Playpark. This was a real-life learning experience for our pupils to see their playpark opened. Many learners have been involved in the initial design ideas, model building and visits to the construction site. This is another milestone in the history of our developing community. It was fantastic to share this experience with pupils from across the schools in Winchburgh.”

Colette Murray, headteacher at Holy Family Primary, added, “It is so exciting for our pupils to attend the opening of Auldcathie Playpark, now sitting adjacent to our newly opened Primary School. Our pupils loved being part of the design process.”

Mia Hendry, flag bearer from Winchburgh Academy, said, “It’s been amazing to have been part of designing our new playpark and now seeing it in real life, it’s even better than we thought it would be. Being part of the ceremony today was a great way to open the park!”