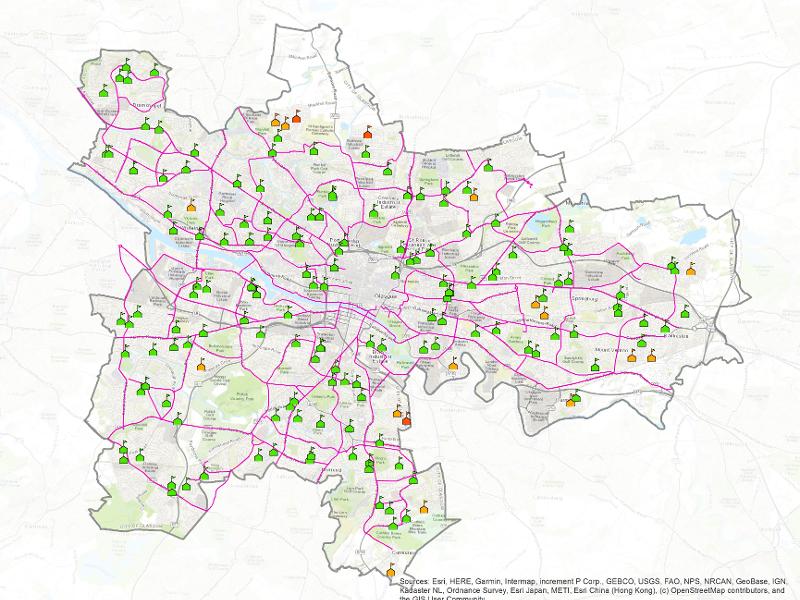 PROPOSALS for the creation of a network of cycle lanes and footpaths covering the entirety of Glasgow could generate £1.843 billion for the city, its council has said.

Plans were launched by Glasgow City Council last year for the build of 270km of active travel infrastructure which would take a decade to complete. The network would add to routes already existing in the city, with the council planning on making it possible to reach any part of the city within 30 minutes of cycling.

A recent consultation on the plans found that 70% of respondents would use the network for their everyday commutes. Estimates show that construction of the network would cost up to £475 million over the next ten years.

However, the council said an analysis showed that the network would bring environmental, economic, health, road safety and community benefits to Glasgow. It added that the analysis has been used to form a strategic business case for the active travel plan, which amounts to a £1.843 billion gain for Glasgow over the next decade.

Further work on the strategic business case is expected to be undertaken alongside the development of a detailed plan to deliver the network, with the council revealing this is due to be produced by summer. It added that the design will draw upon lessons learned in Glasgow, but also from best practice found in other European cities such as Paris, Copenhagen and Seville – each of which have significant active travel infrastructure in place.

Further to this, an early ambition for the delivery plan is that targeted construction of the network will ensure half of Glasgow’s schools will be within 400 metres of safe, segregated infrastructure, with the ‘ultimate aim’ being for all city schools to be easily accessible from the network to encourage higher levels of active travel among the city’s young people.

Councillor Anna Richardson, city convener for sustainability and carbon reduction, commented, “Our active travel plan is a key part of our effort to decarbonise the Glasgow’s transport network. Almost 30% of vehicle journeys in Glasgow are less than 1km and so there is significant potential to reduce the carbon emissions created during those short trips.

“By creating a network of safe and segregated active travel infrastructure, we want to see walking, wheeling and cycling become the first choice for everyday journeys all across the city. Encouraging a shift to active travel will reduce the carbon impact of how we get about Glasgow, but it will also help to improve the overall health and well-being of our citizens.

“The strategic business case clearly recognises the many other positive differences a city network for active travel can have for Glasgow. Improved air quality, less congestion on our roads, increased footfall on local high streets, less strain on our health services and greater use of city streets as places for play and socialising are all identified as possibilities that flow from the creation of a city network.

“The fact a figure as large as £1.8 billion can be attributed to the changes that would come from building a city network is remarkable. But the real prize is the huge potential for improving the quality of life in communities all across the city that could be built upon on a city network for active travel.”