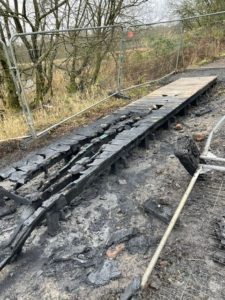 VANDALS have caused ‘extensive’ damage to a new boardwalk forming part of a £2 million project at Dumbreck Local Nature Reserve in Kilsyth.

North Lanarkshire Council said that Police Scotland is investigating the incident and has asked that anyone with information that may help find those responsible to contact the police.

Works first began at the nature reserve in 2020. George Leslie led the build of the boardwalk which forms part of improvements to the site’s network of paths, with works ongoing to re-naturalise the Garrel River and to conserve threatened habitats.

Councillor Michael McPake, convener of the environment and transportation committee at North Lanarkshire Council, commented, “This is extremely disappointing and frustrating for everyone involved in the project, as the boardwalk had been replaced in recent weeks to allow visitors to explore the reserve and wetland area more easily. I would like to thank the local community for their support during this project, as access has been limited while the work is carried out.

“The £2 million project, funded by the council and SEPA via the water environment fund, is creating a new channel through the wetland for the Garrell Burn to meander through and improving fish ecology by removing barriers to allow salmon to return to their spawning ground upstream. Despite this vandalism we expect the project to be complete by April 2022 and more people will be able to enjoy the wonderful wildlife and environment here at Dumbreck.”