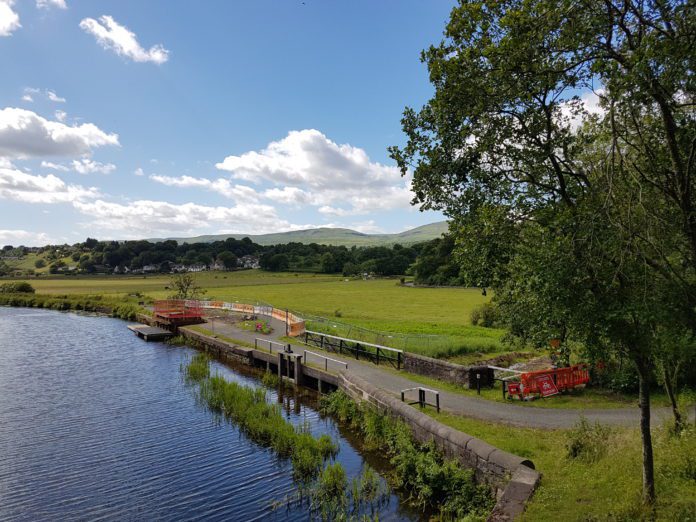 EUROPE’S first smart canal has been connected to a housing development in north Glasgow at a COP26 event.

Sighthill becomes the first of five housing sites to be connected to the award-winning canal, which has an integrated water management system that gives advanced warning of heavy rainfall – triggering a lowering of the canal water.

Water levels can be lowered by as much of 10cm before a period of bad weather, which Scottish Water said creates 50,000 cubic metres – the equivalent to 22 Olympic swimming pools – of capacity for surface water run off.

Scottish Canals said that the innovative system will cut 35,000 tonnes of carbon and unlock 110 hectares of land for 3,000 new homes to be built in north Glasgow.

The £17 million system comes as part of the £250 million Sighthill transformational regeneration area (TRA), with it now connecting to 800 new homes in the area.

Patrick Harvie, minister for zero carbon buildings, active travel and tenants’ rights, made the connection in front of a 100 strong audience of industry leaders at an event in Scotland’s Climate Ambition Zone.

Mr Harvie said, “I’m delighted to join Scottish Canals during COP26 to connect the Glasgow Smart Canal to the Sighthill housing development. I hope other countries with similar historic assets can learn from the impressive approach taken here in Glasgow to mitigate against the damaging impacts of climate change.

“The Glasgow Smart Canal shows how working heritage assets can be repurposed, using modern technology, to not  only provide safe car-free travel routes, blue and green space for leisure and recreation and community-designed, sustainable places for local people to live, work and enjoy, but reduce flood risk and cut carbon. If we can do this in Scotland, it’s possible elsewhere.”

“The Smart Canal is helping to manage flood risk, allowing areas of the city to be regenerated whilst also providing safe active travel routes for people to walk, wheel and cycle.

“It has been a decade of hard work to get to this point and I want to thank Scottish Canals, Scottish Water and Glasgow City Council, for coming together to deliver real change in new and innovative ways.”

“It is very exciting to see such smart technology in operation in Glasgow – one of very few examples in the world – and I am delighted that this ground-breaking project which will play a key role in the continued regeneration of Glasgow’s Canal and the north of the city has been recognised by peers and industry experts for its innovation and excellence.”

A recent health study carried out by panellist, professor Sebastien Chastin of Glasgow Caledonian University, showed that canalside regeneration resulted in a faster rate of decline (3% annually) in mortality rates among those individuals living within 500m of the canal.

Professor Sebastien Chastin commented, “Climate action is an opportunity to improve the lives and the environment as they have co-benefits for health, water and pollution that equal or outweighs the investment required to achieve them. What has happened in North Glasgow by working in an integrated way delivers real change and is a far more effective way of working.”