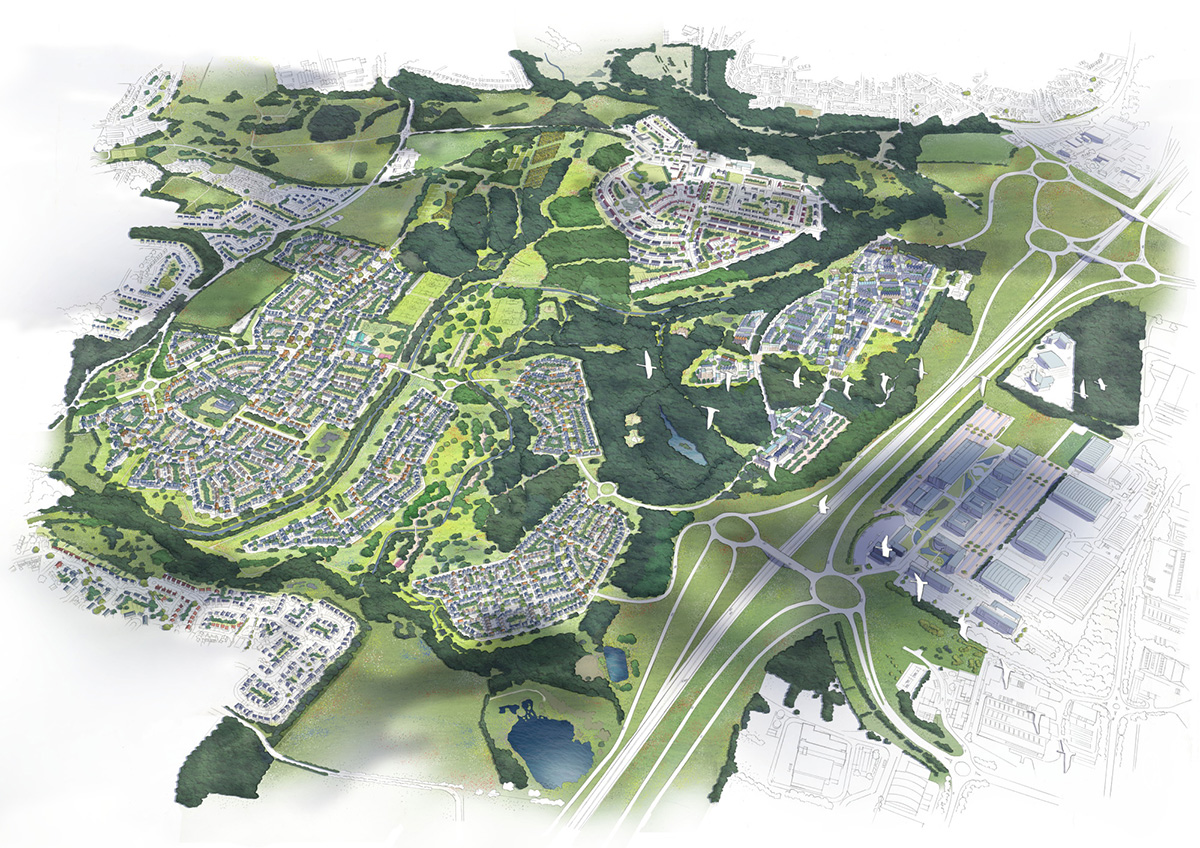 ORCHARD Brae Ltd has submitted updated plans to North Lanarkshire Council for its EuroPark development following a review of a community and stakeholder consultation process.

Feedback has resulted in the removal of all planned development to the north of Calderbank with an attendant reduction in housing provision from 2,600 to 2,350.

EuroPark will be located on the M8 corridor adjacent to the Eurocentral and Maxim business hubs. The proposal includes a mix of private homes, affordable and social housing, as well as a new school.

The ‘centrepiece’ of the project is a new country and heritage park, featuring the Monkland Canal and Calder Water. With the removal of the Calderbank development, the parkland area has been increased and is said to now span 66% of the overall site. This park will retain the existing Woodhall and Faskine woodlands, nature trails and the canal as well as provide modern community and leisure infrastructure. This includes a proposed football and sports complex.

Investment in the local transport network includes plans to upgrade the junction from the country’s main motorway, removing local bottlenecks. A mobility hub will be also created to allow residents and employees to connect with North Lanarkshire and the rest of the country by using more sustainable forms of transport.

Orchard Brae added that it has ‘augmented and improved’ the plans for the neighbourhood centre, creating a community facility, a home working hub, health facilities, a care home, petrol filling station, hotel and restaurant, fast food, an energy centre, and a pub/restaurant.

Stephen Tucker, master planner and spokesperson for Orchard Brae, said, “We are delighted be taking forward our plans with North Lanarkshire council and incorporating the feedback of the community. This input has been invaluable and has helped shape, focus and refine our plans to create something, that we believe, is very special for the area and for Scotland.

“Our plans reflect the site’s strong inherent sustainability and our intent that it becomes an example of zero net carbon development for others to follow. Our green master plan, which sits at the heart of our proposals, puts great emphasis on retaining green space for the public, creating an outward-looking, nationally important parkland community that enhances and embraces its environment, breathing new life and diversity into underused and somewhat neglected land.”

Keddie Consulting was commissioned to carry out a socio-economic study of the EuroPark proposals. Orchard Brae said this research revealed the economic benefits were ‘significantly broader than the immediate impact of unlocking in excess of £350 million of new inward investment’.

Direct investment has been tipped to support 4,290 construction jobs during the development period alongside 789 permanent jobs at completion.

David Keddie, director of Keddie Consulting, added, “The economic benefits for the area are both sizeable and sustainable. They come at a time when they can make a meaningful difference to the surrounding community. We have embraced and enhanced the green credentials of the development whilst creating a mixed-use scheme that will support the people of North Lanarkshire in their lives and careers for many years to come.”

Due to the changes, the application will be open for further public comment for a period of 28 days until 20th November 2021.