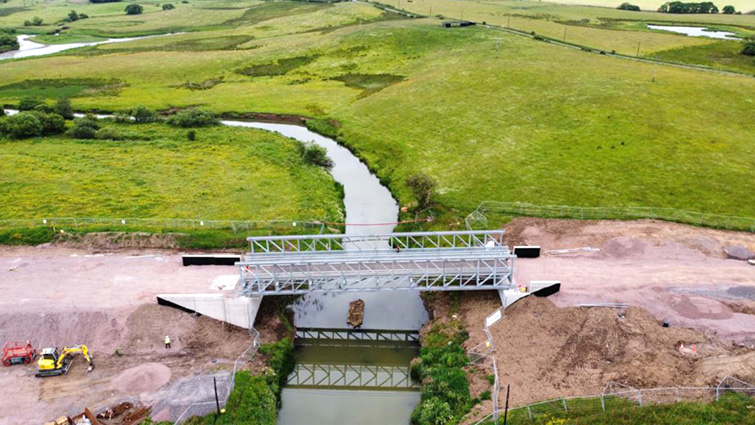 THE rebuild of a bridge ‘vital’ to a Clydesdale community has been completed five weeks ahead of schedule.

I & H Brown carried out the build of the new £2.4 million Ponfeigh Bridge on behalf of South Lanarkshire Council.

It replaces the original crossing at Douglas Water, which was demolished in 2019 after a defective water main rendered the structure as being unable to be repaired.

The modular Delta Bridge system is described as being the first of its kind in the UK by the council.

Designed by Mabey Bridge Ltd, it was assembled on site and, in a ‘painstaking and delicate’ operation, launched over Douglas Water from a specially formed platform before being lowered on to four bearing plinths.

The new bridge was officially opened for public use by councillor John Anderson, chair of South Lanarkshire Council’s community and enterprise resources. He said, “It is amazing to see this project delivered so quickly and during some really challenging times. I am sure the local people will be excited to once again have a vital transport route available to them.

“It was a blow to the community when the previous bridge became unsafe to use and I am delighted to see tremendously hard work from officers coming to fruition and improving the lives of all those who live and work in this area. The bridge has been designed for both vehicles and pedestrians, and, with no weight restrictions on it, it really is there for use by one and all. I wish everyone many years of happy crossing of the Douglas Water.”