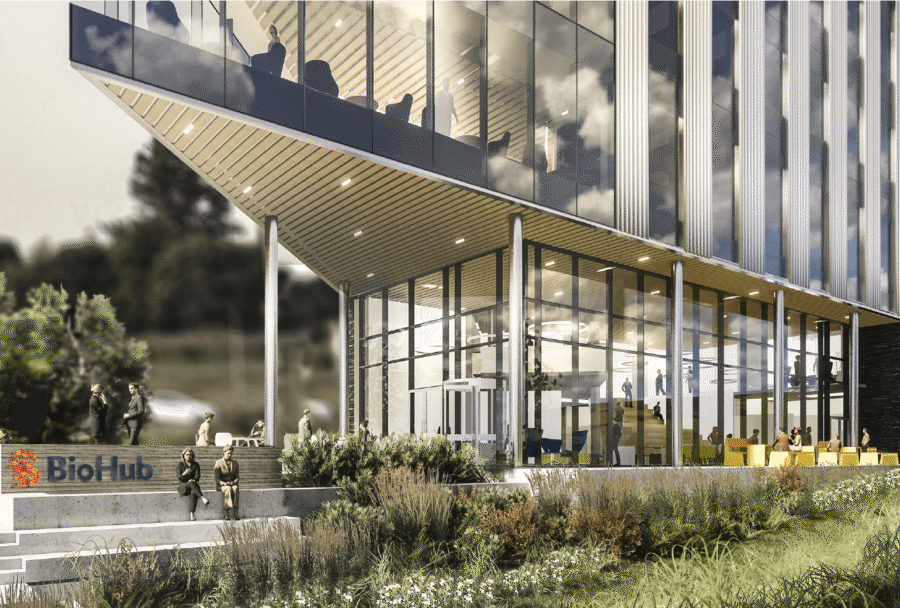 THE £40 million BioHub currently under construction in Aberdeen has been tipped to make the city ‘one of the UK’s most dynamic life sciences locations’.

Scheduled to open in October 2022, the facility will house up to 400 scientific entrepreneurs with the goal of doubling the number of life sciences companies in the region by 2027.

On Monday (June 28), The Scottish Government’s cabinet secretary for finance, Kate Forbes and the UK Government’s minister for the cabinet office, Michael Gove, visited the site for a steel signing ceremony to mark significant construction progress on the project.

Around 800 tonnes of steel frame has been installed on the Biohub site since main contractor Robertson commenced construction at the end of March – equalling 1,600 pieces of steel lifted by two cranes over 10 weeks.

The University of Aberdeen is one of the BioHub’s project partners along with ONE, the  and NHS Grampian, and the ACRD. Opportunity North East is the lead partner and a funder for the project, which has secured £20 million of capital funding jointly provided by the Scottish Government and UK Government via the Aberdeen city region deal.

CEO of Robertson Group, Elliot Robertson, said, “This effective partnership between Opportunity North East, NHS Grampian, University of Aberdeen and government is playing an instrumental role in the recovery, diversification and transformation of Aberdeen by growing the health economy, and we are proud to be the selected construction partner.

“The project is set to double the number of life science companies in north east Scotland and help the sector to collaborate, innovate and commercialise the next generation of therapies and healthcare solutions. The high-quality iconic building consisting of new innovative offices and lab spaces, will create a working environment that will influence and inspire the scientific entrepreneurs who will take up residence in late 2022.”

Finance and economy secretary, Kate Forbes, added, “The life sciences sector is a thriving part of Scotland’s economy, growing at more than 10% a year, providing more than 41,000 jobs and on target to achieve £8 billion turnover by 2025. North east Scotland has a distinctive industry cluster focusing on biotherapeutics and digital health, which are significant areas for growth. The Scottish Government investment in BioHub through the Aberdeen city region deal will support business creation, bring innovative healthcare solutions to market and deliver new jobs as part of the green economic recovery. This is a crucial time for business, trade and investment in Scotland and investing in our communities will ensure every part of Scotland recovers from the pandemic, helping build an economy for everyone.”

UK Government minister for the cabinet office, Michael Gove, commented, “The BioHub will deliver a world-class facility to support new business start-ups and expand Scotland’s powerhouse of life sciences innovation. This will bring new jobs to the region and build its global reputation as a place for companies to set up and invest. Across Scotland the UK Government is investing more than £1.5 billion into city region and growth deal projects, helping communities to build back better from the pandemic.”