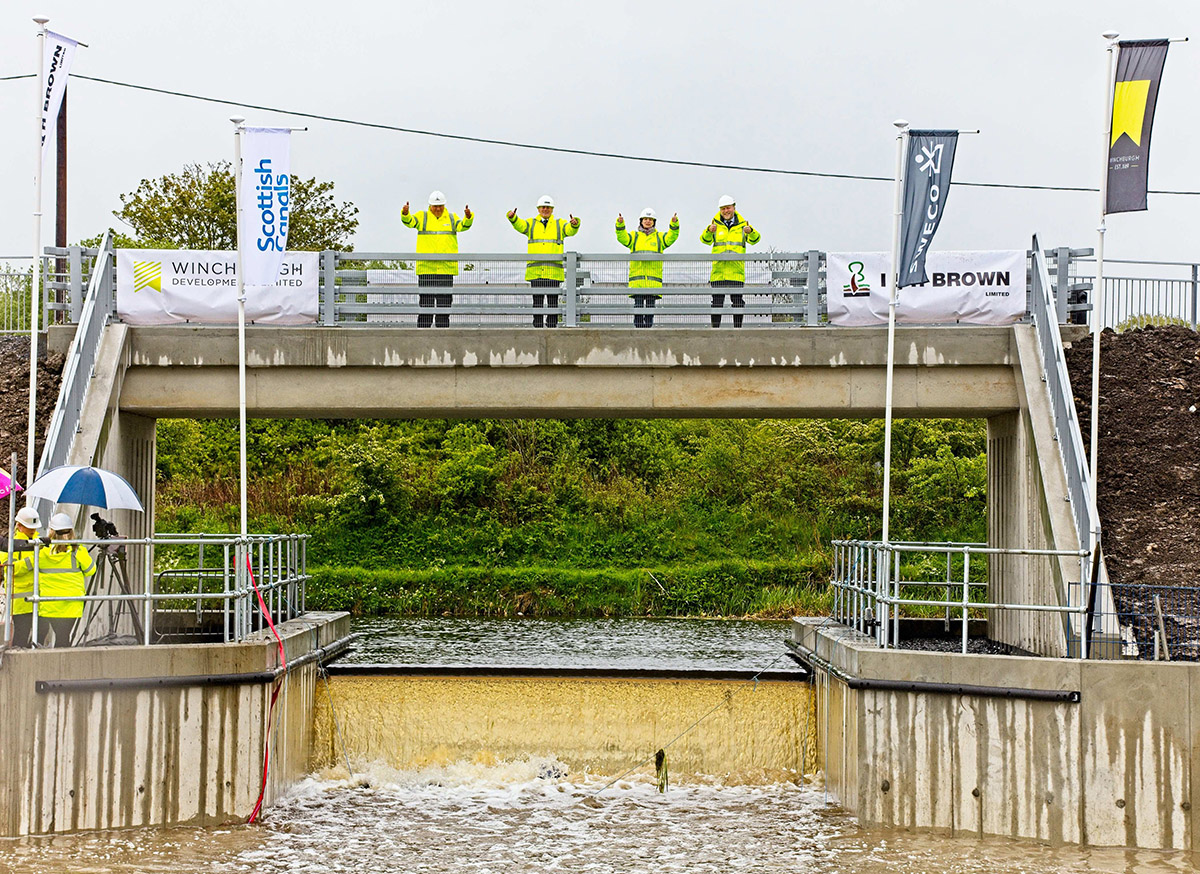 WINCHBURGH Developments has celebrated a crucial milestone after being joined by Scottish Canals, engineering firms I&H Brown and SWECO, and members of the local community to mark completion of the Winchburgh marina basin and watch as it was filled with water for the first time.

The filling of the marina is to be ‘carefully controlled’ over a number of days to allow water to slowly enter the marina, which has a capacity of approximately 5,000 cubic metres.

I&H Brown began work on the construction of the new marina basin last August. Work will now start on a second phase which will include further landscaping, as well as pontoons, moorings and a facilities building.

Winchburgh Marina will be the first new marina to open on the Union Canal since 2014 and will include 20 marina berths as well as leisure and commercial spaces. The marina will eventually connect via a footbridge to the new Daisy Park.  A further 29 moorings will be added along the Union Canal to the north of the marina in a final phase.

John Hamilton, CEO of Winchburgh Developments Limited, said, “This is a hugely significant moment for the Winchburgh masterplan. Located in the heart of the new town centre, Winchburgh Marina will provide a host of amenities for locals and visitors, including new leisure facilities, new restaurant and café spaces, and new homes. It’s a proud moment for the entire team today, including our partners SWECO and I&H Brown who have been instrumental in the successful completion of this project.”

Catherine Topley, CEO of Scottish Canals, added, “The filling of the Winchburgh Marina marks the first step to a new era for the town. Once completed, the new marina will not only offer traditional canal side housing but also 20 new berths for those who wish to live on water. Next year Scottish Canals will be celebrating 200 years of The Union Canal which will coincide with the completion of Winchburgh Marina. This development showcases our determination to create new commercial opportunities as well as destinations for tourism to flourish in every area of our canal network.”

Alastair Lewis, technical director at SWECO, said, “Winchburgh is one of the most significant regeneration and housing growth projects in Scotland, set to deliver thousands of new homes, new schools, an 85-acre park and new employment space. The marina sits at the heart of the development, creating additional connectivity and a focal point for leisure and recreation, with an increasing focus on sustainable infrastructure. It’s exciting to see our plans starting to take shape in Winchburgh as we help to deliver a thriving new town centre in West Lothian”

Scott Brown, MD of I&H Brown, said, “We at I&H Brown like to be involved in projects which make a positive impact on the local community. The Winchburgh Marina certainly falls into that category. We are immensely proud of the project and hope that our client Winchburgh Developments Ltd and the wider community are too.”

J Smart & Co. will also begin work in the coming months on 64 new apartments and townhouses overlooking the marina. Canal Quarter will comprise 50 one, two and three-bed apartments as well as 14 three-bed townhouses.