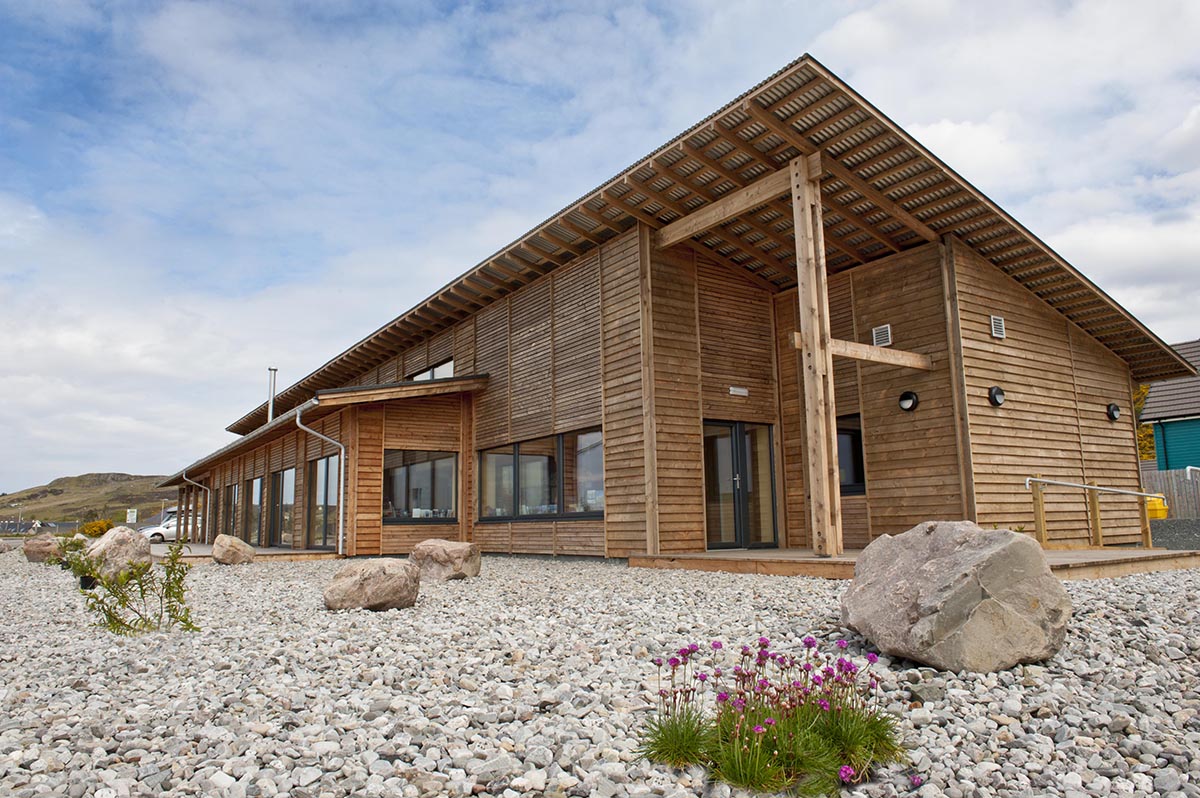 Morgan Sindall reflects on the construction of the GALE Centre in the Highlands, which was built to Passivhaus standards in 2011

50mph winds, driving rain, and an exposed site in the Scottish Highlands facing the Atlantic Ocean might not be a construction site manager’s first choice of location for any normal project. But when the client brief is to deliver Scotland’s first commercial Passivhaus development, the challenge posed by those conditions is magnified.

These were the circumstances facing Morgan Sindall Construction’s Patrick Johnson in 2011, as site manager of the Gairloch & Loch Ewe Action Forum (GALE) Centre project. The main contractor delivered the scheme a decade ago for GALE: a community charity focused on sustainable development and regeneration.

The brief was for the 2,700 sq ft building to include renewable, locally-sourced materials, and to adhere to the strict thermal insulation and air tightness requirements to meet Passivhaus specifications: the German-originated low energy design and quality standard, which can help buildings use up to 75% less operational energy.

To add to the challenge facing Patrick, it was not only Scotland’s first commercial building built to these standards – it was his first project for Morgan Sindall Construction.

Reflecting on the project, Patrick, now a project manager with the business, explained the main considerations for meeting the Passivhaus standard and how things might be done differently now: “We have an unwavering commitment to quality on all of our projects. But to achieve industry-leading air tightness, the devil really is in the details; the things that might seem inconsequential to someone without an understanding of Passivhaus.

“The challenge at the time was ensuring that everyone working on site bought into the methodology and what we were trying to achieve.”

In 2010, there were only around 25,000 buildings constructed to Passivhaus standards. The majority were in Germany and Austria – mostly residential developments. In the decade since, education and training around the standard has improved. But at the time, many site workers’ first experience was on-the-job learning.

“Every detail matters – even things normally out of sight which might otherwise not materially affect a building’s performance or structural integrity,” Patrick added. “That goes down to the exact specifications of tape and grommets used. Those might seem minor points, especially given projects run to tight timescales. If a subcontractor runs out of the specified tape on the day, the temptation may be to substitute in another tape that, for all intents and purposes, looks to be the same. The thinking being: ‘tape is tape’. But it only takes one lapse to affect air tightness.”

Mid-way through, an air tightness test was conducted. Areas the team knew would leak were blocked with specially designed paper. “On first pass, it didn’t meet the air tightness we were aiming for,” Patrick recalled. “We found that that a single cable had been routed through the wrong place in wall and sealed incorrectly. We remedied it and repeated the test successfully.”

The team changed its workflow and approach to managing barrier integrity on the walls, tasking the joiners alone with making changes to this. Patrick said, “Giving one trade the sole responsibility to manage changes to the barrier layers was on-the-fly innovation. But we now specify an air tightness manager from the outset. That person is responsible for ensuring the barrier is maintained. If any trade wants to penetrate it, the manager needs to sign off and ensure that appropriate grommets and sealant are used.

“The level of understanding and capability within the supply chain relating to Passivhaus has definitely increased in the years since. Morgan Sindall Construction is a proud member of the Supply Chain Sustainability School and committed to ensuring suppliers see sustainability standards as something to aspire for, not as a barrier to winning work.”

When testing for air tightness during the GALE building’s construction, the tools available at the time meant the site team checked three times: at the start, the midpoint once the envelope was finished, and the final test. Technological advances now allow for daily, or real-time, testing. Ian McDonald, special works and contract manager who worked with Patrick on the project, said, “As a business, we’ve since invested in thermographic cameras and smoke pens which streamline the air tightness testing process and drive-up accuracy. At the time, that was all performed manually.”

A joiner by background, Patrick enjoyed working with the locally sourced timber: Douglas Fir and Scottish Larch. But both he and Ian believe notable advances in offsite construction offer benefits to insulation and airtightness, which were not available in 2011. Ian said, “Modern methods of construction, such as using Structural Insulated Panels (SIP) which are insulated offsite, reduce the number of joints and junctions which you need to seal on site.”

The GALE Centre was funded by several partners: the Big Lottery Fund, Highland LEADER Programme, Highlands and Islands Enterprise, Community Energy Scotland, Community Land Unit, Social Investment Scotland, and activity undertaken by the charity itself. In the decade since, the role the built environment must play in addressing the climate crisis has been brought into sharper focus. Elizabeth Halliday, Morgan Sindall Construction’s sustainability lead in Scotland, thinks increased adoption of Passivhaus in new sectors is one of the ways the construction industry can meet its carbon responsibilities: “The GALE Centre was ahead of its time and an industry first in Scotland.

“We had an ambitious, environmentally-focused client and third sector funding to deliver the brief. A decade later, and with Scotland committing to net zero by 2045 – five years ahead of the rest of the UK – we’re seeing air tightness and operational energy efficiency standards linked to tranches of public funding. The cost is coming down and innovation is making the standard more straightforward to hit too.”

Janet Miles, MD of GALE, said, “The look and feel of the centre attract regular praise even 10 years on. The heat recovery and mechanical ventilation system means the air is always fresh which makes it a great working environment. We have a wood-burning stove in the centre, but very rarely have to use it except in the darkest winter weeks; sunlight heats the building sustainably on most days.

“Our annual energy use is around 13,000 kWh/annum – less than a quarter of the energy used by a similar sized commercial development, built to traditional standards.”