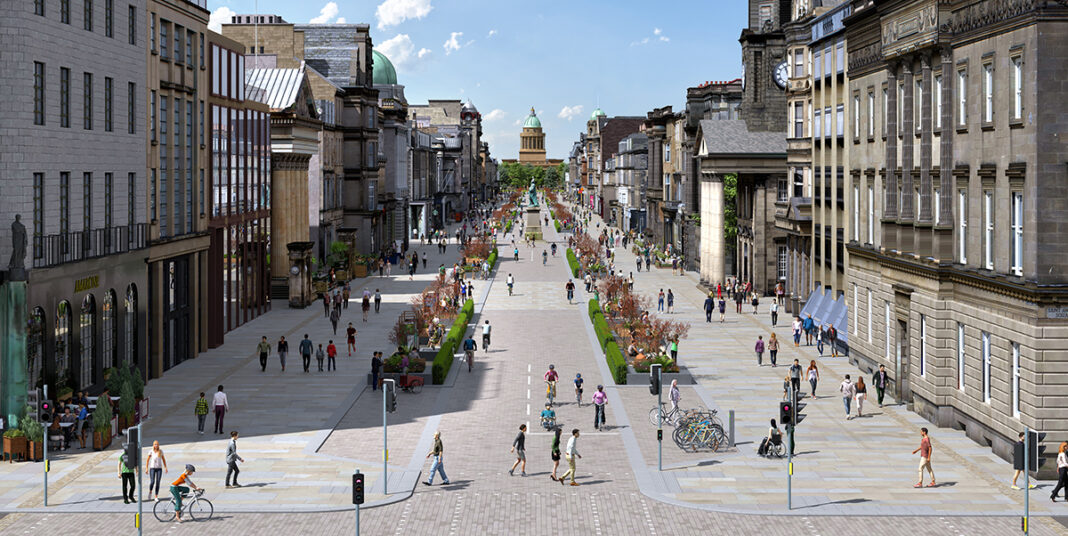 PLANS for the £32 million transformation of Edinburgh’s historic George Street would encourage more people to visit the area, a survey has revealed.

More than 650 people responded to the City of Edinburgh Council’s survey on the final proposed concept designs for the George Street and New Town public realm improvement project, which were unveiled in February.

The blueprint includes significantly widened pavements, landscaped spaces for play and relaxation and a cycling thoroughfare, where motor traffic is largely removed – in a bid to create a people-friendly setting.

Two thirds (66%) of respondents said they would be more likely to return to the street as a result of the improvements – with shopping, window shopping and socialising in bars and restaurants amongst the top reasons for spending time there.

When asked about modes of travel, only 13% said they would drive to the New Town in future, with 67% saying they’d walk, 44% would cycle and 58% opting for the bus. Participants also suggested how they would like to see the redesigned street’s open spaces to be animated – preferences included public art, community events and small markets.

Councillor Lesley Macinnes, transport and environment convener, said, “These concept designs for George Street build on years of engagement with local people, businesses and active travel and mobility organisations, so I’m delighted with the positive response we’ve had from these very groups, along with the general public.

“Our vision for this street is a relaxed, open and accessible space, where people want to spend time, visit local shops, restaurants and cafes and enjoy the unique historic setting. Feedback so far has demonstrated that our plans will encourage people to do just that, as well as choosing to travel there by foot, bike or public transport.”

Councillor Karen Doran, transport and environment vice convener, added, “It was really exciting to see plans for this iconic part of the city brought to life earlier this year, and I know lots of people enjoyed watching the animated videos and imagining how they could enjoy the street in future. Now, thanks to feedback gathered over recent months we’ll be able to refine designs before moving forward with the project and delivering the many benefits it will bring.”