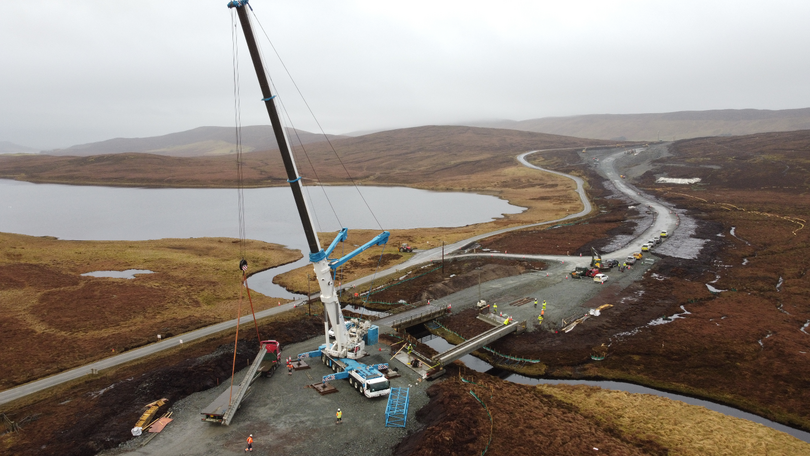 WORK has been completed on the build of a new road in Shetland to carry construction traffic to the site of what will be the UK’s biggest wind farm.

The double-track Sandwater Road, built by RJ McLeod and local contractors, came into use following the placing of a temporary bridge over the Burn of Pettawater earlier this month (March) and forms part of the Viking Wind Farm project.

The road will not be tarred and handed over to Shetland Islands Council until around the time that wind farm construction is completed, which is estimated to be in 2023/24. Parts of it are floating, with a special lightweight aggregate made from fired natural clay used to help ensure its effectiveness. The floating sections mean that the need to dig away deep peat at the sides of the road was avoided.

Work in the coming months will see a permanent bridge built at the road. Earlier this month, a crane from Hugh Simpson Contractors, which can lift up to 500 tonnes, finished placing the concrete beams for the permanent bridge. The beams, weighing up to 43 tonnes, were precast in Banagher, Ireland, and shipped from Waterford to the Peterson base in Lerwick before being transported to the site using extended articulated lorries. 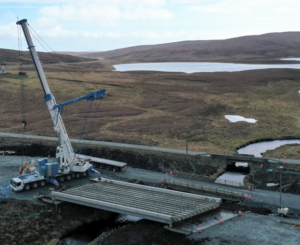 Remedial work will also take place on the old Sandwater Road and brig which was built in 1938. Those behind the Viking Wind Farm project said that it has stood up well structurally to the increased heavy traffic since work began last year on building the Kergord access track. However, repairs are required to replace one of the old bridge parapets, while the other parapet is in line for some repointing along with ‘minor’ tidying up work along the old road.

Viking Energy Wind Farm spokesman, Aaron Priest, said, “We’re pleased to see the new Sandwater Road reach this important initial milestone and to be able to move our construction traffic from the old B-road, which will now be tidied up. We would like to thank other road users for their patience over the past few months.”