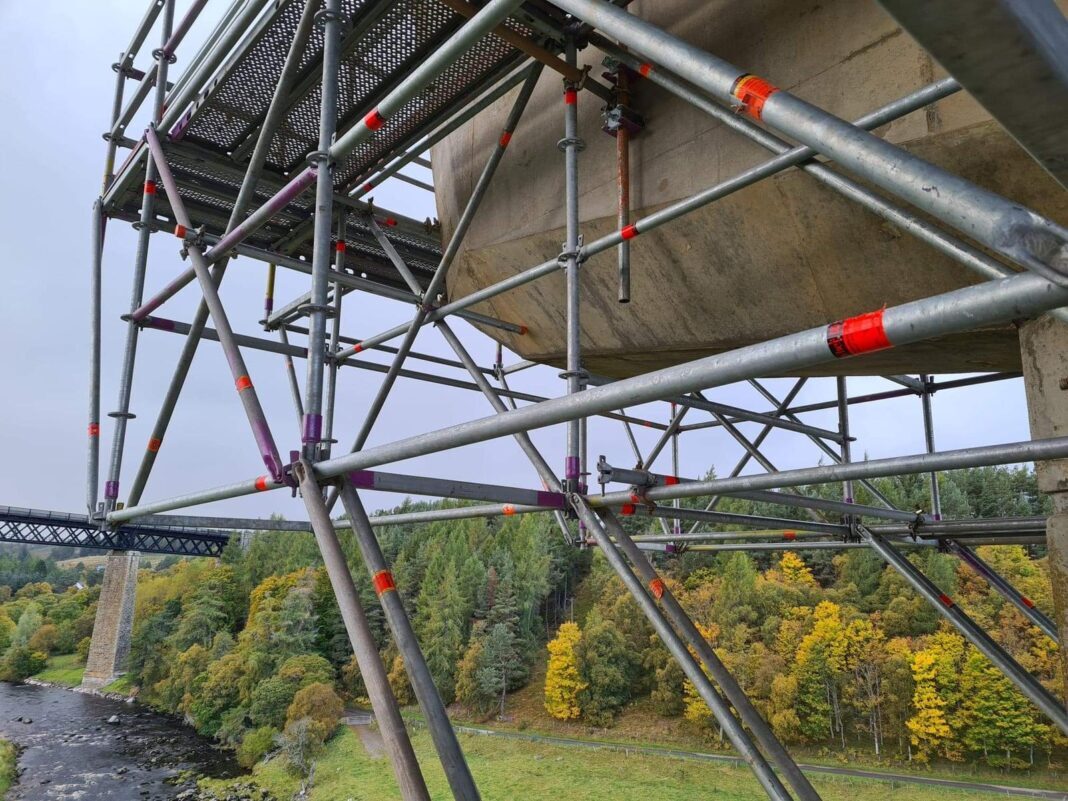 LAYHER has revealed the ‘simplicity, versatility and lightweight characteristics’ of the firm’s scaffolding have been clearly demonstrated during a maintenance project on the A9 bridge across the River Findhorn between Aviemore and Inverness.

Work involving painting, material replacement and under deck inspection has been taking place.

“The use of Allround Lightweight minimises loading onto the ground,” explained Kenneth Redman, Layher’s technical manager (Scotland).  “This is particularly advantageous at this bridge location where soft ground conditions and relatively steep slopes are encountered on the river banks.”

The Layher system has been installed to provide access to the full height of three support piers and will play a key role in enabling access to the underside of the bridge deck.  Layher revealed that the equipment requires a ‘minimum’ amount of material and fewer tie points than would have been required with, for example, tube and fitting scaffold.

“Importantly, the inherent strength of Allround Lightweight has enabled cantilevered decked areas to be constructed at the top of each pier, immediately under the bridge deck,” added Ross Brown, director of I-Scaff Access Solutions Ltd, who have installed the structure for main contractor VolkerLaser working for BEAR Scotland – the operating company for Transport Scotland’s NW Trunk Roads.

“This avoids the need to install scaffold to the full width to the ground which, in turn, has a beneficial impact on build time, material volumes and wind loading in the exposed location. The design also gained from Kenneth producing a LayPLAN SIM scheme, which enabled us to demonstrate to our client exactly what they would be getting, even before the scaffold was built.” While access to two piers is via a scaffold built directly from the ground, the other has had to accommodate the significant slope. Layher said this has been addressed by the company’s equipment being used to build a graduated support scaffold upon which a level gantry, eight bays in length, has been constructed.  In both cases, access to the full height of each pier is then achieved via eight Layher staircases.

Sean Pike, Layher’s UK MD said, “It is vital that such work is always conducted safely, quickly and with minimum disruption and we believe our scaffold design has played a key role in each case.”