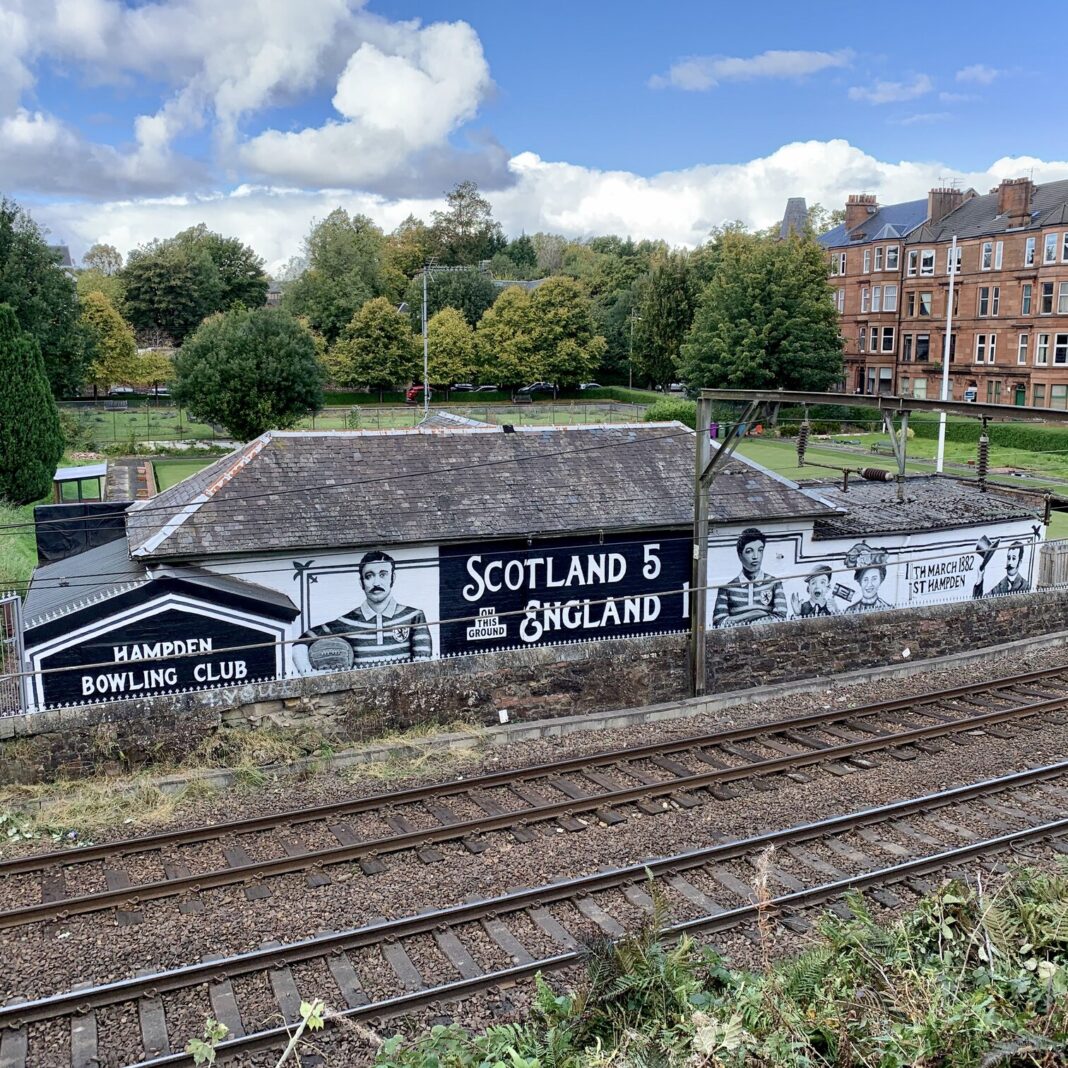 AFTER qualifying for a major football tournament for the first time in 22 years, Scotland may just steal the headlines of the delayed Euro 2020 regardless of results on the pitch – the current Hampden pitch, that is.

While games are being played in Glasgow and across Europe, archaeologists will move in to carry out geophysical surveys and excavations on a bowling club nestled in the south side of Glasgow.

That bowling club is on the site of the world’s first purpose-built international football stadium, and template for every stadium created since. In 1873, Hampden Park was opened in Crosshill, before closing in 1884 to make way for the build of the Cathcart Circle Railway Line.

Come 1905, Hampden Bowling Club was constructed on the site. For years it was merely a scoffed at myth, that this humble bowling ground was stood on such a place of historical importance.

This was exemplified in 2012 when a letter dropped through the doors of local residents warning that the club could close to make way for flats.

Graeme Brown, now house convener of the club, was one resident who answered the call to ‘use it or lose it’. He said, “When I joined in 2012, I was told that this is Hampden Bowling Club and (I was) standing in the first Hampden Park stadium,” Graeme told Project Scotland, “Thinking Hampden Park was up the road, (I thought) this is bonkers. If it’s true, why does no one know about it?”

The members were so certain that Graeme was convinced to begin searching for records to prove the claims – no mean feat, given Ged O’Brien, founder of the Scottish Football Museum at Hampden Park, had already concluded it wasn’t at the bowling ground but closer to Victoria Infirmary.

Even all the ordnance survey maps held in the National Library of Scotland made no mention of the stadium. Documents had detailed the original stadium as being in the shadow of Hampden Terrace – which could put it anywhere in the district.

With previous searchers having only used ordnance maps, Graeme turned to railway records which eventually cracked the mystery in 2017, confirming Hampden Bowling Club was indeed on the site of the world’s first international football stadium.

“Ged kept saying: ‘You need to tell everyone; there’s no modesty in this one’,” Graeme said, before telling how former club president, Jim Peden, had to be there for the opening of the railway document after spending years insisting it was the site of the stadium.

One of Graeme’s main hopes of the archaeology project, led by Archaeology Scotland, is that it will confirm whether or not the club’s pavilion is that of the first and second Hampden Park, used by Queens Park and the national side from 1884 to 1903.

He is 99% certain it is. All that is missing is a receipt of the purchase of the pavilion from Queens Park, who sold off the second Hampden pavilion and grandstands in 1903.

Despite being of such historic significance, Graeme admits the bowling club needs a huge amount of investment in infrastructure – including a completely new roof on the ancient pavilion.

The #Restore1stHampden initiative was launched as a result of this. Lager giant Tennent’s has already backed the project, with Graeme saying help from construction firms would be welcomed – even if it’s just a case of providing advice on how to maintain parts of the club grounds, until grant funding is received.

“Over the next year Archaeology Scotland will come in and glue all the stuff together we’ve worked on, pull it all into one, confirm that we should protect it, and we get the big badge,” he said. “Then Year Two – what’s the best way of restoring it? There are different ways and means. How far do you futureproof it? How do you get the most out of the historical part, but also keep it as a working bowling club? That’ll take a year.

“It’s good that a construction-element can be taken from the story, as you can run a bowling club, you can do all that stuff, but to take a 100-odd year-old building and do the work in the right way, so it doesn’t get too modern and the principles remain – that’s a big part of the project.”

Graeme said there is a hope that the archaeology project in June 2021 speeds up the applications for grant funding. The club already had a mural commemorating Scotland’s 5-1 victory over England in 1882 painted on the pavilion. Assuming Covid restrictions are lifted by June, thousands of European fans will view it when getting the train to Hampden for the Euros.

Wider plans are currently being built on, with hopes to allow for the club to become a historical destination while also maintaining its core purpose of being an operating bowling club. Further to this would be the creation of a trail around the three Hampdens.

In the meantime, preparatory work is underway on the upcoming archaeological dig.

“The archaeologists are so excited,” Graeme said. “This is not a Roman floor or a castle… this stuff is the people’s archaeology.

“The big hope is they can find the centre spot of the first Hampden, which isn’t handy as it’s in the centre of the bowling green, but it could be figured out through ground penetrating radar. Imagine if they find that. That’s when it gets exciting. It’s going to be right bang in the middle of the Euros.”

*The headline is in reference to Bacarra’s 1977 hit, ‘Yes Sir, I can Boogie’, which has become the nation’s unofficial anthem for the tournament after Scotland’s players were filmed dancing to the song in the dressing room following qualification. Subsequently, the song reached Number 3 in the UK music chart and the band has expressed an interest in re-recording the hit for the national team ahead of the delayed Euro 2020.