THE produce of small-scale farmers in East Africa has gone global through a collaboration with a Scottish innovator.

“We acknowledge it’s not the norm or the run of the mill, but it is exciting,” John Ferguson, founder of Sisaltech, told Project Scotland about his sustainable insulation product made from sisal.

John founded the firm in 2014, having spent several years in Kenya, Malawi and Tanzania using his agricultural background to help farmers get to grips with changing demands caused by climate change.

“Sisal is a tropical plant. It’s got big, spiky leaves and it’s extremely drought-resistant,” John explained. “So, as droughts become more frequent with climate change, farmers are increasingly seeing it as an attractive crop to grow.

“I thought if I was buying this fibre from small-scale farmers, exporting it to Europe and using it to make sustainable products, then it would be good for the farmers and good for the environment.”

Historically, sisal is a crop commonly grown for making ropes. Initially, John sought to utilise the plant for geotechnical purposes, such as stabilising riverbanks. However, he spotted a gap in the market for a sustainable insulation solution.

“We started doing various research projects on other potential uses for sisal,” he explained. “One of the areas that came up was using it in the building industry. The building industry, to be polite, is fairly conservative – it doesn’t change as fast as other industries, and a lot of the materials which are mainstream are basically petrochemical-based and not very sustainable.” 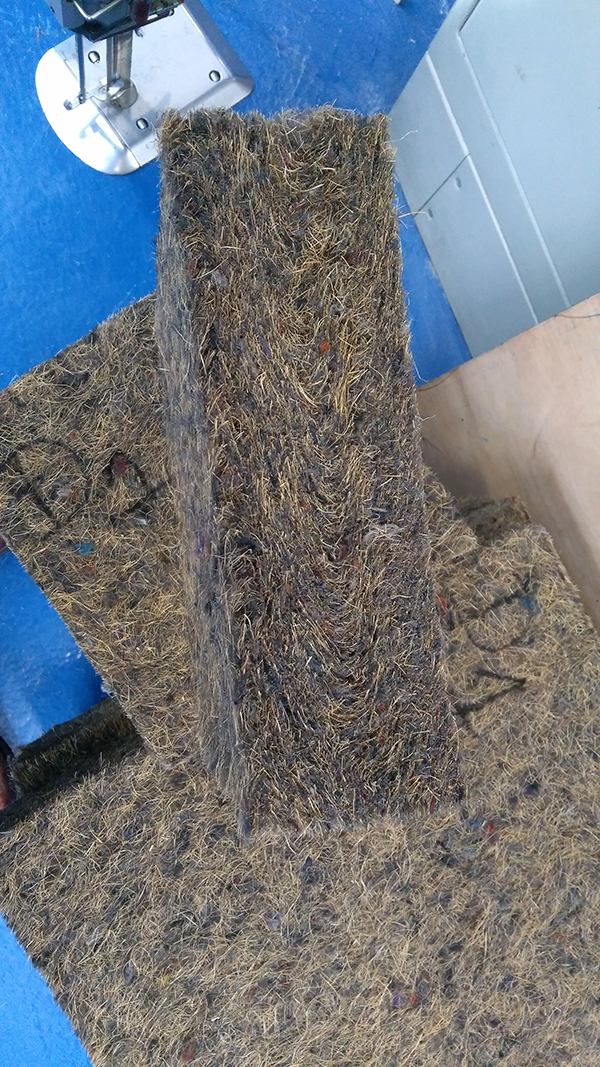 John conceded his product is pricier than other insulation methods but said consumers must consider the benefits.

“Sisaltech has the ability to buffer moisture by averaging it out through days and weeks – it basically adjusts itself to have the same moisture content as the air, so where you maybe have a foil-backed insulation there’s a risk of condensation. With a foil-backed insulation the room can heat up extremely quickly but cools down quickly and has a tendency to overheat. Natural fibres have a greater thermal mass, so have more potential to absorb and release part of that heat.”

Sisaltech is cut to exact measurement requirements, meaning the customer merely has to ‘pop it’ into the frame of the building. As it is tailored to the needs of the building, John said it ensures a better thermal performance.

Although not willing to disclose the exact science behind the product, John explained the sisal leaves are stripped of their fibres in East Africa, then left to dry in the sun before being brushed, baled and shipped to Edinburgh ready to be transformed into insulation.

“A lot of people say to us: ‘If you’re bringing an insulation product halfway around the world, it’s not very sustainable’. We’re not bringing insulation, we’re bringing bales of sisal fibre. Due to the fact it’s being transported in a ship, the carbon footprint of that journey is very small.”

A specialist company was recruited to arrange a complete carbon lifecycle for Sisaltech. The results found that transporting the product from Edinburgh to a customer in Midlands has a bigger carbon footprint than shipping the bales from East Africa to the Scottish capital.

Once the bales are in Edinburgh, the firm starts blending the fibre with different materials. Sisaltech worked alongside Zero Waste Scotland to identify waste streams. Currently, the production is underway using recycled Harris Tweed offcuts.

Once the sisal fibres have been blended with other recycled natural fibres and a starch-based binder, high pressure air is used to form them into a mat. The mat then passes through an oven which causes the binder to melt and the resulting insulation can be cut to size.

John admits the firm is ‘very small’ at the moment, but he has lofty ambitions of helping Scotland meets its target of becoming net zero by 2040. With 80% of the UK’s building stock in 2040 having already been built, he said there will be an increased demand for insulation and said his product fits the bill for climate targets.

Prior to lockdown, the firm had a stand at the sustainable built environment event, Futurebuild. “We were one of the most visited at the show,” John said. “We were there for three days and people were just fascinated – we struggled to get coffee breaks!”

As the firm grows, the farmers in East Africa will continue to grow from the access to the European market that John said they otherwise wouldn’t have.

“We believe that we have created one of the best insulation products there is,” he added. “There’s the adage that, for every pound you spend is a vote for how you want the world to be – so are you wanting your money to go to some petrochemical company, or do you want your money filtering to farmers in Africa and helping the carbon footprint?”