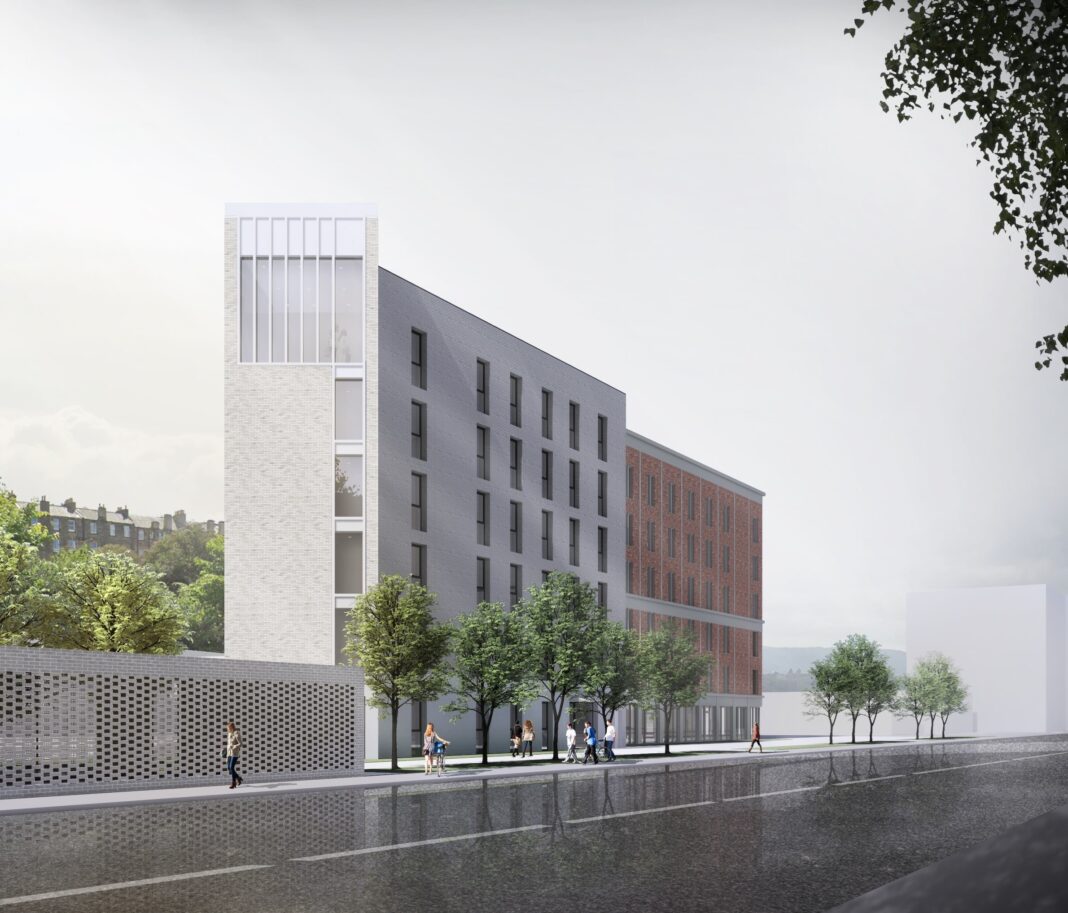 PLANS for the build of student accommodation on Edinburgh’s London Road have been approved.

The 76-bed build, being undertaken by HG Developments, comes as the second phase of development by the firm on London Road – with the new accommodation to neighbour a planned 198-bed student accommodation build at 61-63 London Road.

Situated opposite to the Meadowbank Stadium, the 76-bed development will replace an existing car wash with the delivery of a six-storey block, bringing a ‘strong’ architectural element to the corner site.

On completion, HG Developments said that Edinburgh-based charity, People Know How, will locate their headquarters on the ground floor of the 61-63 London Road. The organisation seeks to help people reach their potential, with the new space to allow them to be closer to the communities in which they serve.

Only four parking spaces will be delivered as part of the development, to continue the high sustainability of the location. A focus on cycling is a ‘key’ part of the plans, with capacity for 198 bicycle spaces – there will also be Sheffield racks available for visitors and staff, giving a total of 210 bicycle spaces.

Energy efficient design will also be incorporated into the build to further enhance its sustainability, and water consuming technologies will offer considerable reductions in water use compared to baseline technologies – including low flush toilets and low flow taps and showers.

Architects 3DReid worked on the scheme and the planning consultants were Turley.

A spokesperson for HG Developments commented, “We are delighted to have received approval of our application at committee today. This high-quality student accommodation proposal will serve to redevelop a brownfield site in previous commercial use.

“Given the high sustainability of the location there is no requirement for car parking spaces beyond those for the city car club and disabled spaces, and we are ensuring that there is excellent provision of bicycle spaces.

“The development also serves to address the increasing demand for student accommodation, fulfilling the ambitious growth plans of universities in the city, which are key drivers of the economy. This also helps to reduce pressure on the private housing market as well as delivering a substantial amount in additional expenditure into the local economy.”

Glenn Liddall, chief executive of People Know How, added, “Having worked closely with the developer we were pleased to see this scheme, which acts as an extension to the neighbouring building which is now under construction, gaining planning approval. We are locating our headquarters here, allowing us to serve the local community and enabling us to grow.

“As a large number of students routinely work with us by way of volunteering, internships and placements we are in the enviable position of being able to establish a positive relationship with students in the building, who can support us in our work, which will also benefit them; and engage them in the local area.”

Ruta Turcinaviciute, project designer for 3DReid, said, “The proposed scheme marks an important moment for the future redevelopment of a constrained and complicated site, which will benefit the urban quality of London Road and represent a further contribution to the ongoing regeneration of the wider area.

“The proposed building seeks to address the prominent corner of the site, to its eastern approach, while the material and language of the building follows the emerging palette of the new developments currently proposed in the area, in addition to responding to the tones of the more historic tenements that form the wider context.”