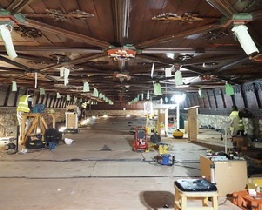 A 6th century cathedral church which is believed to hold part of the remains of William Wallace is undergoing a major conservation and restoration project.

The work comes as St Machar’s Cathedral Church in Old Aberdeen celebrates the 500th anniversary of its heraldic ceiling.

The project, which has received help from public donations, will see a replaced roof, repairing of stained glass windows and the restoring of the heraldic ceiling. Local firm, Graeme W. Cheyne Building Contractors, will undertake the work.

The cathedral’s roof was last reslated in 1867. However, it has recently been shedding slates in ‘great’ numbers and water has been penetrating the fabric and the interior. A spokesperson from the cathedral said that the work will keep the building sound for at least the next 100 years.

Currently, Charles Taylor Wood Conservators are working together with Scottish wall painting conservators to clean the ceiling, repair any holes in and around the decorative shields, hand carve new details, fix any loose paint and gilding and preserve as much of the original wood as possible.

The overall cost of the programme of the repairs is £1.853 million, to which the National Lottery Heritage Fund and Historic Environment Scotland have each given £300,000. Other trusts supporting the appeal are the Garfield Weston Foundation, the National Churches Trust, Scotland’s Churches Trust, as well as donations from the public.

A spokesperson from the cathedral told of the history of the building, “The cathedral survived changing bishops, monarchs, and religious worship over the centuries due to the reformation, wars of independence, civil war, the Jacobite risings and world wars. This building which was largely built between 1380 and 1520 is a time capsule holding on to these changes through a wealth of knowledge, tradition, and craftsmanship.”

After being hung, drawn and quartered in 1305, William Wallace’s dismembered body was sent to different parts of Scotland. Historians believe that his arm is buried in the structure in Aberdeen, with a carved star in one wall believed to mark the place of burial.