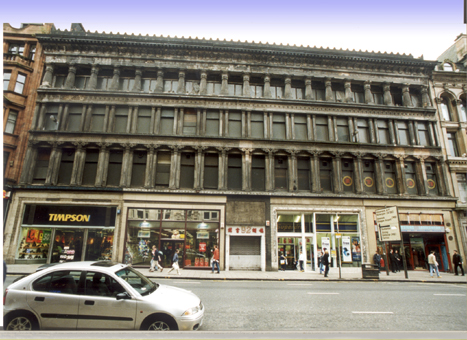 OVER 50 people gathered in Glasgow recently at an event aimed at helping to save a famous city centre A-listed building.

The Save Egyptian Halls event, hosted by The Alexander Thomson Society, brought together professionals and the general public to discuss what such buildings mean to Glasgow and how the 19th century Egyptian Halls on Union Street could be saved from demolition.

The four-storey building was designed by Alexander ‘Greek’ Thomson. The renowned Scottish architect is behind the design of other structures such as the St. Vincent Street Church and Holmwood House. However, in a letter to his brother he stated that the Egyptian Halls was his finest piece of work.

The Society’s vice-chair, Scott Abercrombie, opened the event by giving an update on the current status of the building. Shrouded by scaffolding since 2009, the Egyptian Halls has been deteriorating over the years and is under genuine threat of demolishment should a plan not be created for it. Europa Nostra, a pan-European federation for cultural heritage, recently named the structure as one of Europe’s seven most endangered buildings.

Much of the first half of the event was made up of the history of not just Thomson’s work in Glasgow, but the city’s architecture as a whole. Niall Murphy of Glasgow City Heritage Trust spoke about commercial architecture, while Fiona Sinclair of Fiona Sinclair Architects and Mark Baines of the Alexander Thomson society gave their insights into Thomson’s work across the city.

Then came the technical element. Ben Adam, managing director of David Narro Associates, spoke on the conservation approach to structural engineering, incorporating issues such as rainwater. He detailed the use of cast iron and stone in the build of the Egyptian Halls and the use of thick columns on the top floor which would normally, at that time, have been found on the ground level of such structures.

Dara Parsons, deputy head of casework at Historic Environment Scotland, spoke of the development and protection of Scotland’s built environment. He told Project Scotland, “There are some complex issues around Egyptian Halls. Solving those issues will need some creative solutions. It needs creative approaches to design and engineering, but also creative approaches to funding. It also needs a commitment from all involved to continue to discuss and test a wide range of options.”

Andrew McConnell told of the work of the Glasgow Building Preservation Trust in protecting the city’s structures, before Jamie McNamara, of the Society for the Protection of Ancient Buildings, concluded the presentations with a talk on the rescue and reuse of historic buildings.

In line with the event came the announcement of the winner of The Alexander Thomson Society’s ‘Re-imaging Egyptian Halls’ competition, which sought to attract ideas for potential uses for the building through architectural drawings. In total, 21 entries from around the world were received. Igor Shkut and Vasilii Portnyagin from Russia won the first prize of £500 for their concept of the building being transformed into a temple of thought – featuring a library and galleries.