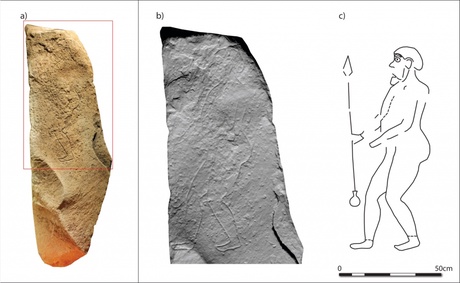 ARCHAEOLOGISTS from the University of Aberdeen have recreated images of a figure found on a Pictish stone discovered during the construction of the A9/A85 road scheme in Perth.

Archaeologists said that only the outline of the figure could be seen, with the carving being faint in places and the surface of the stone partly delaminated. Researchers at the university took thousands of photographs to create 3D images of the figure, allowing for them to clarify the design and compare it to those found on other stones.

Professor Gordon Noble, of Aberdeen University, said, “In Anglo-Saxon England we have lots of examples of burials with weaponry and the poem Beowulf epitomizes the warrior ethos of this period,” he added.

“This has not been evidenced in Scotland in the same way but here through the new Tulloch find and a reconsideration of long-known stones we can see that warrior ideology cast in stone – meaning these martial values were conveyed in a very public way to be visible in the landscape and to invoke supernatural protection.”

“This bridges a crucial gap in knowledge as although we know that warrior ideology is important for rulership, we haven’t previously been able to demonstrate how that evolves through time in the period before the sixth and seventh centuries when we begin to get historical records for Scotland.

“We believe that the weapon-bearing individuals shown on these stones may represent a war-oriented social organisation that was integral to resisting the Roman Empire and to creating the overtly hierarchical societies of the post-Roman period.”