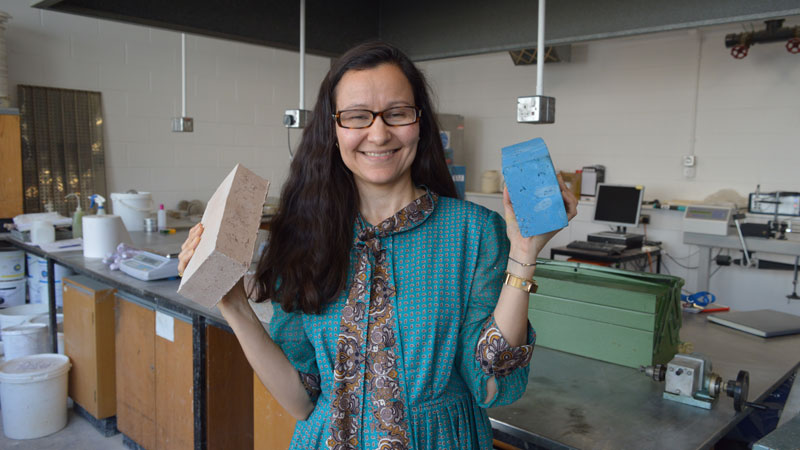 A recycled brick created by Heriot-Watt University’s spin out company Kenoteq Ltd is to be showcased on The One Show.

Billed as using a tenth of the CO2 emissions of a traditional fired brick, developers also say that it uses less than a tenth of the energy in its manufacture and can be made in any colour.

The K-Briq uses waste materials that would otherwise be sent to landfill to create the brick – using compression instead of cement and heat to form the blocks.

Professor Gabriela Medero, who conceived the idea of the K-Briq more than 10 years ago, said, “We are looking forward to sharing the journey of the Kenoteq on tonight’s show and immersing viewers in the story of our research. We hope K-Briq will help support the sustainability ambitions of today’s construction industry.

“I have spent many years researching building materials and have been concerned that modern construction techniques exploit raw materials without considering that they are amongst the largest contributors to carbon emissions. The amount of waste they produce is not sustainable long-term.

“The K-Briq looks like a normal brick, weighs the same and behaves like a clay brick but offers better insulation properties. It is sustainable and not kiln-fired so it is far better for the environment and represents massive savings for the construction industry in terms of related taxes.”

Dr Sam Chapman, who works in close partnership with Professor Medero on Kenoteq, added, “Kenoteq has invested in machinery that can produce three million bricks per year. In the past year, we’ve produced thousands of bricks and put them through rigorous testing with the K-Briq now commercially available to construction clients.  The Scottish Government has set very high targets for housebuilding with 50,000 new homes earmarked for construction in the next three years. We hope Kenoteq will be part of those homes.”

The team behind the K-Brick has revealed that an agreement has been reached with Hamilton’s Waste & Recycling to produce the brick onsite at their recycling site.

The story behind the brick can be watched tonight on BBC 1 at 7pm.