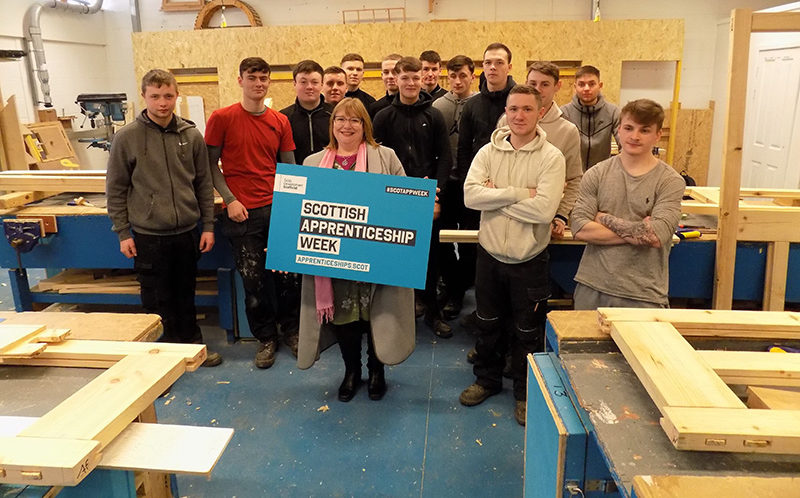 The convenor of the Scottish Parliament’s education and skills committee received a tour of the engineering building where she was able to chat with first year construction apprentices with CITB. New College Lanarkshire trains almost 900 Modern Apprentices through its partnerships with Skills Development Scotland and commercial contracts.

Ms Adamson said, “It’s always a pleasure to visit New College Lanarkshire and particularly this week as the apprenticeship programme and Developing the Young Workforce is so important for future skills and the future economy of Scotland. To see young people engaged in that process is absolutely fantastic.

“What we want to see in Scotland is a parity of esteem between the technical skills that young people are learning through different routes to the workplace and going to university. These are highly trained, highly skilled young people and their contribution should be recognised.”

New College Lanarkshire is hosting a number of activities as part of Scottish Apprenticeship Week. At its Coatbridge Campus, the college is hosting a three-day Team UK Selection event in conjunction with WorldSkills UK. The contest will see students and apprentices from across the UK compete in four disciplines (3D digital game art, IT network administration, mechanical engineering: CAD, and web design) for a place at WorldSkills Kazan 2019.

Meanwhile, at the college’s Kirkintilloch Campus, the Security Skills Challenge involves around 40 third-year Modern Apprentices in electronic fire & security systems undertaking skills tests, after which four apprentices will be selected to compete at IFSEC International’s Engineers of Tomorrow event in London in June.