Home Drainage Milling robot is a cut above 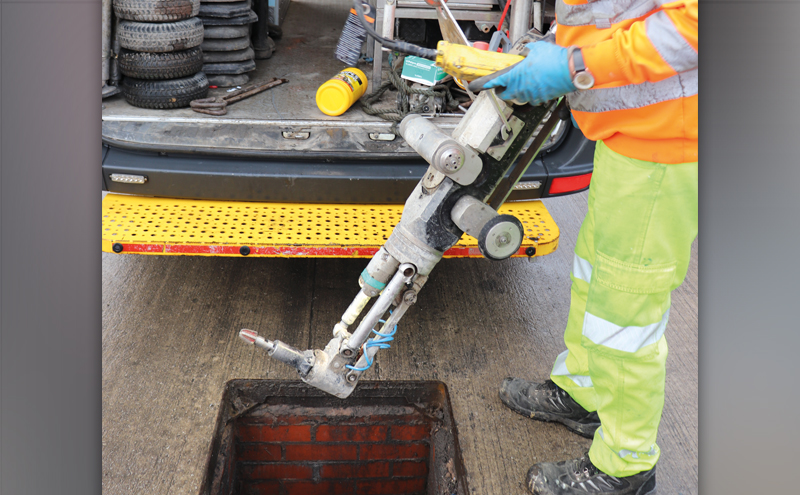 TWO steel and concrete foundation piles that had been driven through a 375mm culvert have been given the chop in Irvine, Ayrshire, using robotic cutting technology. The sewer rehabilitation service at Lanes Group was called in after the 150mm piles were put through the concrete culvert during the building of a garage in the garden of a house.

The drainage specialist said it was commissioned to carry out the work because the only other option was to demolish the garage and excavate the culvert. Lanes explained that such a major undertaking would have been even more arduous, because the culvert took large volumes of water off nearby high ground, making contingency plans to manage the flow more complex.

John Murray, operations manager at Lanes’ Glasgow depot said, “The high and unpredictable flow rates meant we had to pick just the right moment to carry out the work and select a cutting method that could complete the task safely in as short as possible a time. The location where the piles had been accidently driven into the culvert also meant our only safe entry point was from a manhole more than 60 metres away, a distance that compromised certain cutting systems.”

Lanes’ latest ProKASRO electric-powered milling robot was deployed. The 760mm-long ProKASRO 4.0 DN 200-600 robot is designed to be operated in pipes with diameters from 200mm to 600mm. An operator controls the machine from a console in a van, viewing it through a video camera lit by LED lights.

Four specialist crews carried out the work. A jet vac crew carried out the over-pumping. Two operatives controlled the ProKASRO robot. A CCTV drainage survey crew used a robotic camera to record evidence of the work, and a point lining team stood ready to line the pipe once the piles had been cut out.

Simon Bull, manager of the Lanes sewer rehabilitation and lining division said, “Each pile took a full day to remove. It’s a highly-skilled, precision task that requires a delicate touch and a good deal of patience. Key factors were the toughness of the material, the limited operating space within the pipe, given the size of the piles, and the need to proceed with caution to avoid causing further damage to the pipe which might have caused its collapse, making excavation the only option.”

The jet vac tanker stationed at the next downstream manhole vacuumed pile fragments flushed down the pipe while larger and heavier fragments were removed at the same point by confined space entry. Then one-metre point liners were installed – with each section double-lined to provide additional strength. A point liner, or patch liner, is a short liner, made from resin-impregnated sheets of glass-reinforced plastic (GRP) which is wrapped around a cylindrical rubber tube called a packer. The packer, along with the liner, is then moved into position in the pipe and inflated with compressed air to push the liner against the pipe wall where it is left to cure, or harden, in ambient temperature.

Simon Bull added, “With the four liners in place, the rehabilitated section of pipe had a design life of at least 50 years. This was a challenging project, but with a combination of new technology, lateral thinking and persistence, a good outcome was achieved.”