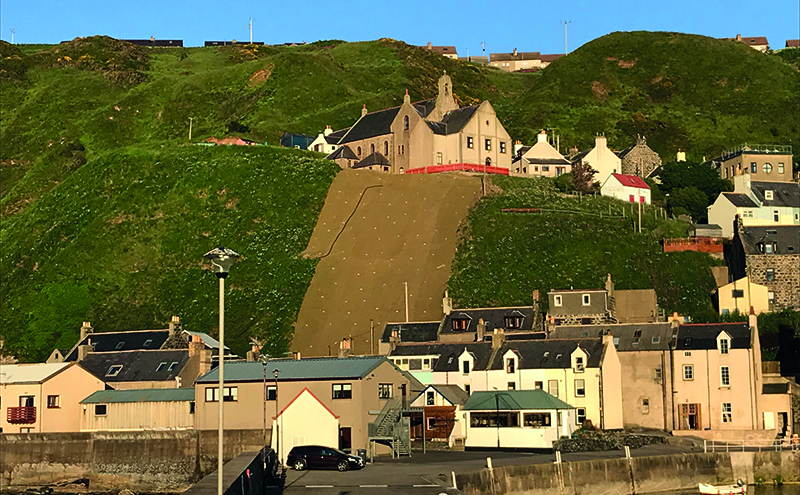 Contractor BAM Ritchies, working in collaboration with Aberdeenshire Council and geotechnical engineers Atkins, was tasked was able to provide a solution when, in November 2017, a landslide occurred in the small coastal village of Gardenstown, blocking a road that provides essential access for residents and local businesses, as well as the town’s operation harbour, which is key to the local economy.

With the B9123 Harbour Road blocked, part of the village was virtually isolated. “It was a serious problem for the village of Gardenstown,” Angus MacGregor, project manager at BAM Ritchies told Project Scotland. “Historically, what’s happened is the younger people have moved out of the traditional part of the village up to the newer part, which wasn’t affected. The people who were affected tended to be the older generation.” 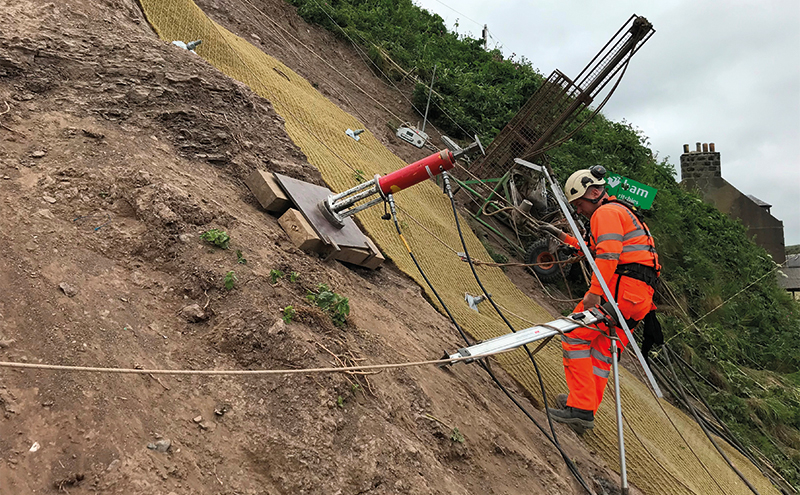 Immediately after the landslide, Aberdeenshire Council contacted Atkins to provide emergency technical advice. Following an initial assessment and the clearing of the road, a series of planned opening times were implemented to ensure residents could get fuel and coal for the harsh winter months.

Angus arrived on site in mid-January. “You come up to Gardenstown and you don’t really know the village is there; you come over the rise and the village reveals itself. Access is extremely restricted because there is a series of hairpin (roads) down to the harbour side, so from the moment we arrived it was clear to us whatever investigation and then solution we had to put in place was going to be severely affected by the access constraints.”

Angus explained that the conventional approach for bringing in the likes of low loaders, piling and drilling rigs, and articulated trucks was impossible, with the closest any big plant could get being a mile away.

“Everything had to be considered on that scale – a big, unstable slope, 80-metres high, sitting about 75 degrees in the horizontal, but everything had to be almost what you could throw in the back of a van, come in bits and then be assembled in situ.” 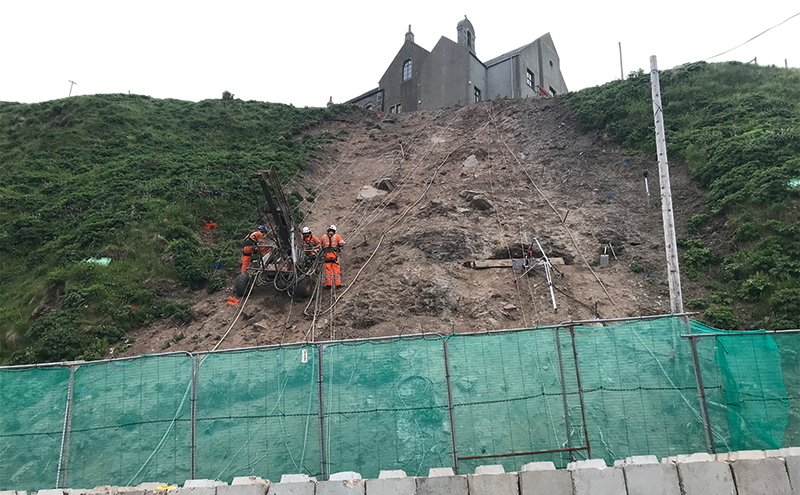 Adding to the precariousness of the situation was the fact that one of the village’s five churches sat atop the slope. “The church was petering on the top of this landslip with only two and half metres between the top of the slip and the church wall,” explained Angus.

It was concluded that the primary cause of the landslide was excessive water ingress, which triggered movement of the superficial deposits on the steep coastal slope.

In addition, the surface drainage system at the crest of the slope was not sufficient to prevent water discharging directly onto the slope. The presence of faulting within the solid geology was considered to be a secondary factor.

In March 2018, while ground investigations were being carried out, further ground movement occurred resulting in a second “significant” landslide. Following this, a temporary stabilisation system was developed.

“We were appointed as designer for a temporary works solution that would allow them to reopen the road for 12 months,” Angus added. “We installed a system of ground nails and an active support mesh to stabilise the current slip surface, and in conjunction with developing that design with Aberdeenshire Council and Atkins, the system put in place was sufficiently robust that it allows them to augment that system in the future, should they get budget approval for a long-term solution along the same lines.”

Reflecting on the project, Angus said, “It was done very swiftly. The road itself only stayed shut with no movements for three weeks so for the degree of work completed, I think that was really well done.”

The project was completed in June 2018 and was shortlisted for the BGA Fleming Award. Angus said it was a “privilege” to be nominated, adding, “Some famous names in the geotechnical industry are sitting in front of you and you’re presenting some information about your project.”

McGee Group, Arup and RKD Consultant were named winners of the Fleming Award for the Claridges Hotel Basement project in London.