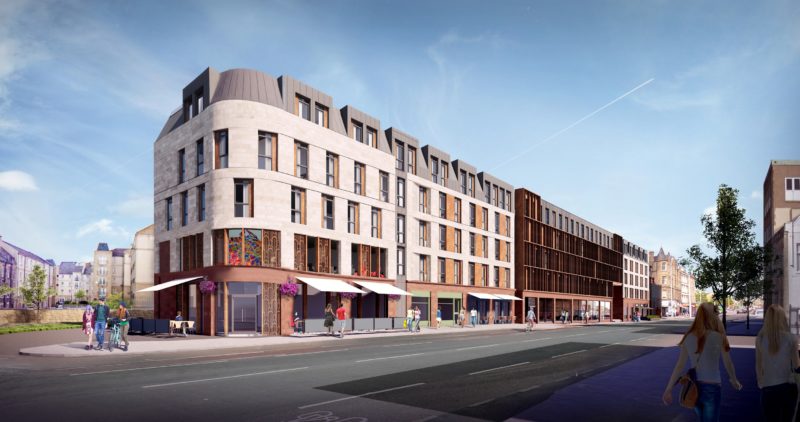 DRUM Property Group has announced it has submitted revised design plans for its Leith Walk development following “detailed discussions” with the City of Edinburgh Council’s planning team after the main planning application was submitted in August.

Drum’s £50 million proposal for the 2.9-acre Stead’s Place site is for a mixed-used scheme combining affordable housing for local people and post-graduate student accommodation – as well as a hotel, restaurant, café and retail units.

Drum said the “most significant” changes of the updated scheme include:

Graeme Bone, group MD of Drum said, “This has been a very high profile planning application and one that, if approved, will have a significant and positive impact on Leith Walk, and how it connects with the rest of the city. As such, we have worked closely with the council’s planning team following the initial submission and now have a design which reflects their input and feedback from the local community.

“By reducing the height of the building facing on to Leith Walk and the number of student rooms, we have a design which is more sympathetic to the building heights and front-facing facades of the surrounding tenements in the immediate local area. The clear distinction at ground floor level of the sandstone retail units from the residential accommodation above is more in keeping with the rest of the tenement buildings on the street.  And the rounded corner of the building with its first floor feature windows, offers the opportunity for eye-catching artwork in a highly visible location.

“We have also given a higher priority to pedestrians and cyclists including a well-defined, safe and well-lit path into Pilrig Park and beyond, as well as increased cycle parking on site.

“I am confident that our revised proposals will bring an added dimension to Leith Walk, opening up what is currently an inhospitable industrial site by creating a vibrant, contemporary and accessible community for residents and visitors alike.”

Drum said it is expected that the revised planning application will be discussed by the council’s planning committee early in the New Year.