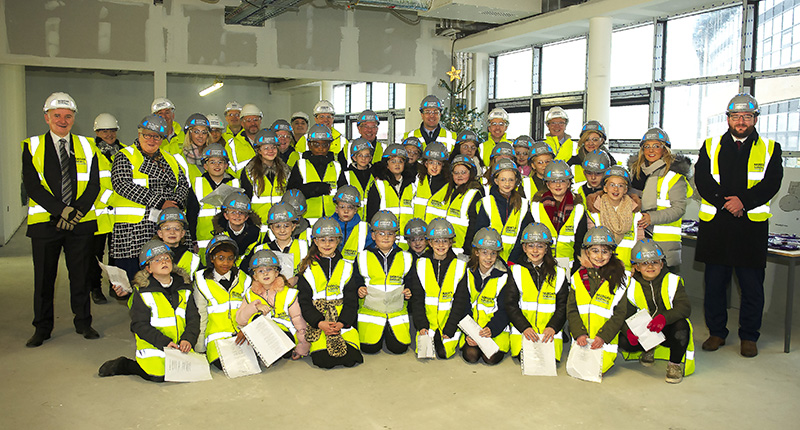 The first school on Petersburn Road will provide a new home for Petersburn and Dunrobin primary schools. Just over a mile away, on South Biggar Road, a second site will see Tollbrae and St Edward’s primary schools co-locate.

The contracts, which have a combined value of £35 million, were awarded to Morgan Sindall Construction & Infrastructure by North Lanarkshire Council through its Schools and Centres 21 framework.

Project teams recently joined pupils, teachers and local councillors, including the Provost Jean Jones, to enjoy festivities including the switching on of the Christmas tree lights at Dunrobin followed by a trip to the St Edwards and Tollbrae site to see a time capsule being lowered into the ground. Members of each school choir sang Christmas carols and pupils used VR headsets to get a glimpse of what their finished schools will look like.

The Dunrobin and Petersburn primary will comprise of a £17.3 million two-storey curved building which is being delivered as a tandem build on field space beside the existing Dunrobin Primary. The new facility will have capacity for 484 pupils and include a nursery and learning support unit. Following the building’s completion,  the existing school will be demolished to expand the new facility’s playground and parking facilities. A new synthetic sports pitch will also be installed.

Similarly, St Edward’s and Tollbrae will relocate into a new £17.9 million school that is being built on the existing playing fields. This joint campus will have two classroom wings connected by a shared gym, along with a dining hall and multi-purpose rooms to accommodate the combined 342 and 217 pupil intakes. The building will house 20 classrooms set over two floors, along with two nurseries. The old schools will then be demolished, with car parking to be constructed where Tollbrae currently stands and a floodlit synthetic pitch laid on the existing St Edward’s site.

Both facilities are due to be completed by spring 2019.

Stuart Parker, MD of Morgan Sindall Construction & Infrastructure in Scotland said, “Local authorities are looking to provide the very best learning experience for pupils – and to do so with efficient use of the public purse and estate. The co-location of multiple schools, each with their own identity, isn’t without its challenges. Successful implementation requires a measured approach and close collaboration between customer and contractor teams. We are well versed in handling the sensitivities and logistics that go hand-in-hand with these kind of projects, having delivered several across Scotland.”