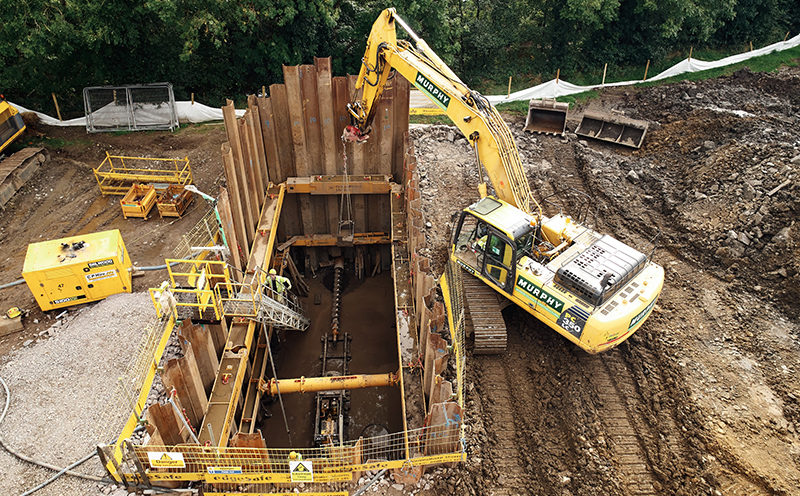 MODULAR shoring equipment from Groundforce has played its part in the installation of a new gas main under the Colebrooke River at Maguiresbridge, Co Fermanagh, Northern Ireland.

The Murphy GMC joint venture is installing the pipeline for SGN Natural Gas as part of a £250 million Gas to the West energy infrastructure project.

Groundforce explained that a section of the main runs parallel to the A4 Belfast road and, in two locations where this passes over the Colebrooke River, the buried pipeline must go underneath. At Maguiresbridge, this was done using an auger-boring rig operating from a pit dug into the ground. The machine drives a micro-tunnel under the river to a reception pit on the other bank.

Groundforce designed a structure comprising three hydraulic frames. The middle and bottom frames consisted of the firm’s Mega Brace units, each propped at the mid-point with one 80-tonne capacity HSK80 hydraulic prop. These frames were designed to be removed as soon as the concrete base slab had been cast and reached full strength. 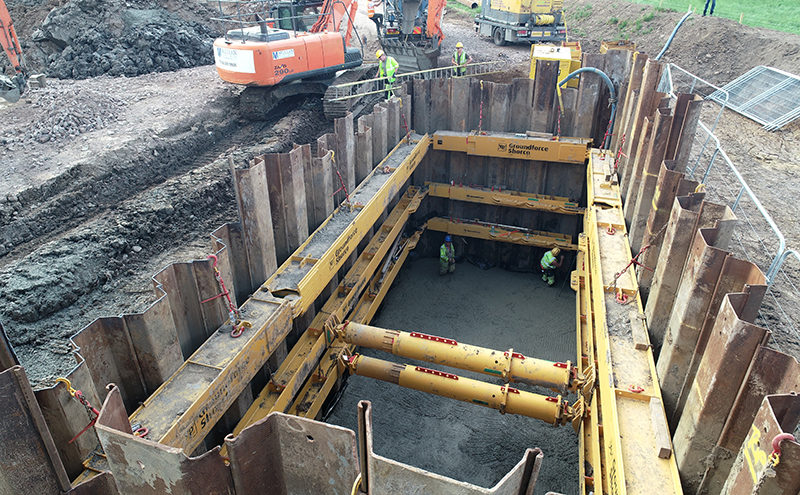 The top frame, however, had to remain in place throughout in order to support the opening at the top of the excavation.

Richard Dunn, Groundforce technical sales executive said, “For the top frame we used our Super Mega Brace. We couldn’t have a prop across the top of the excavation because the client wouldn’t then have been able to lift the auger boring machine into the pit. That’s why we used our strongest bracing system.”

After the support structure had been designed and the necessary components assembled, it was discovered that the ground conditions were not as had been expected. Richard added, “The test borehole hit a low spot in the limestone bedrock and so our calculations were out: the piles were meant to be driven to 8m but there was refusal at 6.5m. There wasn’t enough depth for the sheet piles to toe-in.”

The first river crossing was completed during the summer; Murphy GMC and Groundforce are now completing the second river crossing about four miles further downstream.