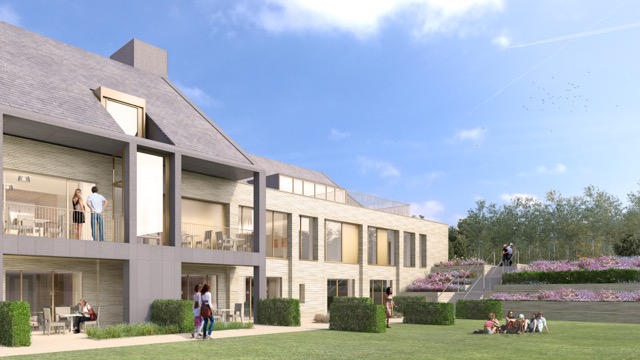 AN interior designer who played a vital role in designing the new £21 million Prince & Princess of Wales Hospice in Glasgow is to be honoured by having a room at the new facility named after her.

Clare Macallister, who worked for Glasgow firm Burns Design, was design director for the new hospice, which is set to open to patients in November. Having been diagnosed with cancer in 2013, Clare died aged 48 in 2016 just a few months after work started to build the hospice on a 7.5-acre site in Glasgow’s Bellahouston Park.

Now the hospice’s chief executive Rhona Baillie has revealed that a special family room in the new building will be named after Clare to honour her memory and contribution to the project.

Her husband, Andy Macallister said, “Clare had been involved in design work on the existing hospice in Carlton Place prior to her illness so she knew the whole team there well. The project to build the new facility was one that was really close to Clare’s heart. She loved the fact that Rhona and her team were so determined to create a building that was different from the usual hospice design.

“Being able to design something that was more like  home for patients rather than a clinical facility really allowed her to show her talent. We’re really thrilled that the new building will include a room named in Clare’s honour.”

Andy and his children – Sophie (18), Joe (14) and Adam (11) – helped raise funds to build the new hospice after taking part in a 5k run last year at Bellahouston Park. His brother and niece are also doing a charity bike ride from Glasgow to Edinburgh.

Rhona Baillie, chief executive of The Prince & Princess of Wales Hospice said, “Clare was such a talented designer and a key member of the team working on our stunning new building. During her illness, she remained so committed to the project. Her talent and design skill is almost literally woven into the fabric of the building and it’s really fitting that we’ll be able to pay a small tribute to her memory by naming a room in her honour.”

A campaign, called The Brick by Brick appeal, to raise funds for the new hospice was launched in 2012. Earlier this year the £21 million target was reached.

The facility will offer support to 1200 new patients and families every year in a building, which is the first in Scotland to be built to the Scandinavian Sengetun model of care, with adaptable private, social and family spaces specifically designed to boost wellbeing and create a sense of calm.

The hospice will feature 16 en suite bedrooms with private terraces, soft-seated areas and open-plan kitchens. Patients and families will have more opportunities to partake in normal family activities, while the hospice’s commitment to the palliative care of young people aged 15 and over will include specialised accommodation to meet their particular needs, including family bedrooms, lounges, social areas, therapy rooms, spa bathrooms, a hydrotherapy pool, sanctuary, sensory room, a young people’s lounge and training rooms.