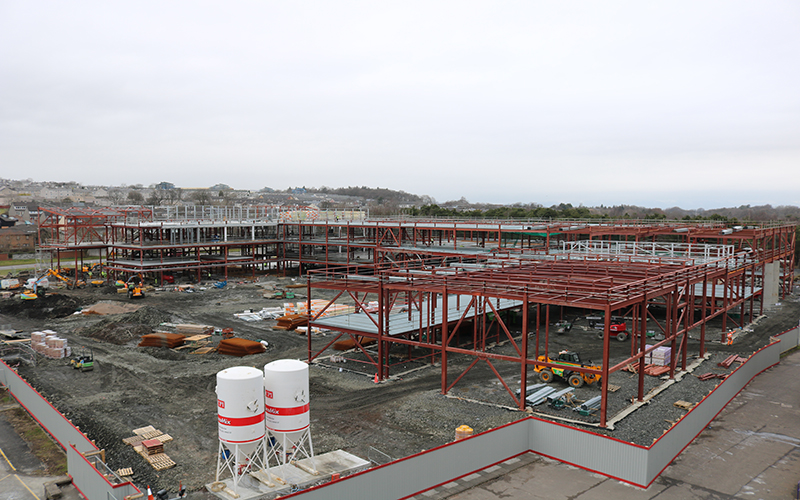 THE £37 million Cumbernauld Academy and Cumbernauld Theatre campus has celebrated a major milestone with the completion of the steel frame.

Construction was temporarily blighted by poor weather conditions last month but the project, which is being undertaken with development partner hub South West with North Lanarkshire Council, is starting to take shape.

Work started in July last year at the site, which is also home to the current Cumbernauld Academy. Phase 1 of the new school car park has also been completed.

Morrison Construction project manager Mark Stirling said, “‘We are extremely happy with the progress that is being made on site. There was a 14-week programme to erect the steel work, which we finished on time. Work on site has now progressed onto pouring the concrete floor slabs before the roofing and external walls are completed in the coming months.

‘‘We have a great working relationship with the school with staff and pupils at Cumbernauld Academy very interested in our work on site. An S6 pupil has been completing work experience in administration at our site offices since August and we have been active members of the school community attending many events.’’

Michael McBrearty, chief executive of hub South West added, “Having successfully delivered the town’s Greenfaulds High School in partnership with Morrison Construction in 2016, it is no surprise that even against the extreme elements the site team have been able to deliver this initial key phase to programme. With the new Cumbernauld Academy and Cumbernauld Theatre starting to take shape, it’s great to see pupils and the wider community engaging with the project and looking ahead to the benefits of the end result.

“We are delighted to see the progress being made on this true community project that will have such a positive impact on the Cumbernauld area once complete next year.”

The campus will have capacity for 1250 secondary pupils and a 300-seat replacement venue for the current Cumbernauld Theatre.