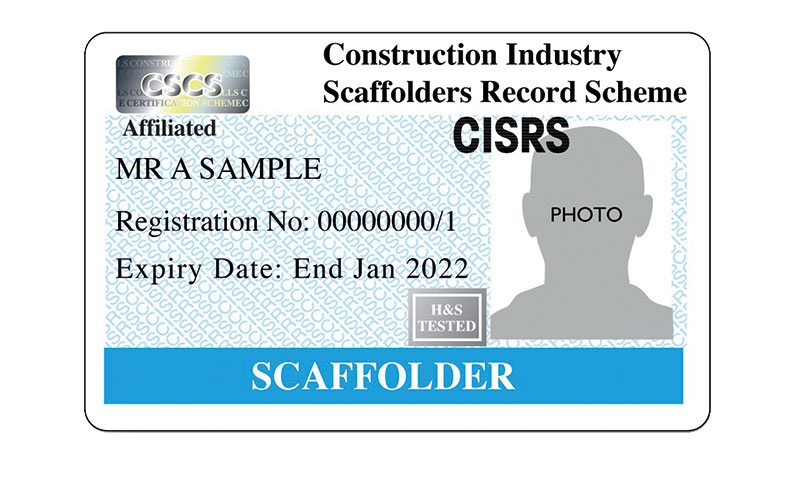 THE Construction Industry Scaffolders Record Scheme (CISRS) has announced that over 1000 scaffolders and advanced scaffolders have now attended the CISRS CPD course and applied to renew their CISRS cards under the new scheme rules.

The requirement for scaffolding operatives to complete the two-day course prior to card renewal was introduced in July last year.

Dave Mosley, CISRS scheme manager said, “This is a fantastic achievement in such a short space of time, as any change to an established scheme usually takes quite a while to bed in.

“We had expected a lot of people whose cards expired in 2016 simply to take a H&S test and apply for an early renewal prior to the CPD requirement going live. These figures show that there are plenty of scaffolders who have completed the programme and demand for places on courses is increasing.”

Prior to the launch of the CPD/refresher element to the CISRS scheme, reaction from the industry was mixed.

Jonathan Gaunt, training manager for Generation Training Services explained “It’s interesting to see the change in attitude of some of the scaffolders over the two-day programme. Initially they arrive feeling that they will learn very little, however giving them a knowledge test early in the course usually highlights that there are areas they do need to brush up on.

“It’s been a long time since some of the delegates attended a training centre and for those who got their card under Grandfather Rights it could actually be the first time. After the initial uncertainty they tend to enjoy the course and mixing with their peers, the delegate feedback forms reflect a positive experience.

“We commend CISRS for responding to the demands of both the construction industry and the HSE, producing a comprehensive CPD product for scaffolders with a very timely, positive approach.”

CISRS said that, despite the initial backlash from some segments of the sector, the new course has been “very well supported”. Last summer accredited CISRS training providers proceeded cautiously in relation to the amount of CPD courses included within their training programmes. However, CISRS said the number of scaffolders looking to attend CPD has proven to be “much higher than expected” with centres making additional courses available to meet demand.