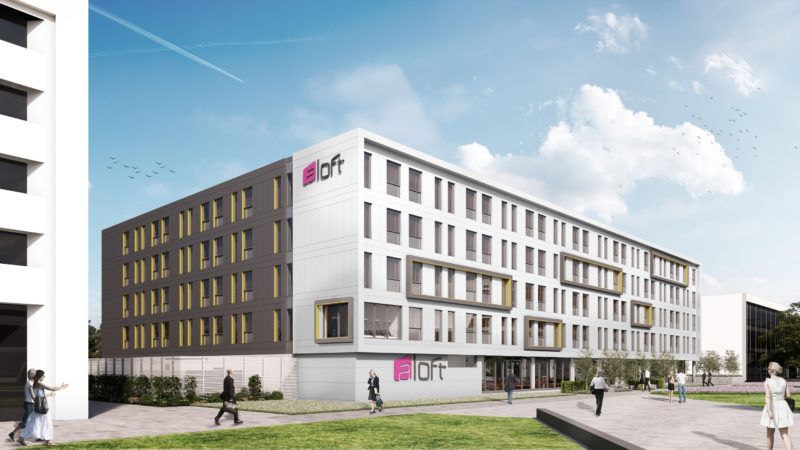 CONSTRUCTION of a new 150-bed hotel on the site of the new Aberdeen Exhibition and Conference Centre (AECC) is underway.

The Aloft Hotel will be the first building in phase 2 of the AECC masterplan, and will be located north of the Hilton Hotel that adjoins the new AECC, which is currently under construction.

The AECC project, which is being delivered by Aberdeen City Council and its development partner Henry Boot Developments Limited, and being constructed by Robertson Group, has been tipped to create over 350 jobs and contribute an additional 4.5 million visitors and £113 million of visitor spend to the Scottish economy.

Designed by architects Cooper Cromar, with interiors by Twenty2Degrees, the new Aloft Hotel will be the first of its kind in Scotland and will include a signature WXYZ bar, Re:mixSM lounge and gym. The hotel will be managed by Redefine|BDL Hotels.

Nick Harris, director of Henry Boot Developments in Scotland said, “Having a world-class music and conference venue in Aberdeen will be of tremendous benefit to the north east. Recent figures from industry body UK Music suggest 40% of people going to live music events are music tourists – people travelling to the venue from elsewhere in the UK or abroad. The new AECC arena will have a capacity similar to the Hydro in Glasgow, making it far more likely that Aberdeen will attract the big names in entertainment and get a bigger slice of this music tourism pie. That’s why it’s great to have high-quality, modern hotels like Aloft on site to meet this need.”

Aberdeen City Council Co-Leader Councillor Jenny Laing added, “This is another major milestone in the development of the new AECC which is a big part of our plan to transform the city with major new infrastructure projects. We’re looking forward to watching the progression of the Aloft hotel as it is built, and how it integrates with the other structures already in place.”

Robertson Group’s chief executive officer Derek Shewan said, “The AECC will be a world-class events and conference space, with equally outstanding facilities. We at Robertson Group are proud to be constructing the Aloft Hotel, which will be situated on the AECC site. Groundworks have already begun on the hotel, which will ultimately boast 150 bedrooms over four floors.”