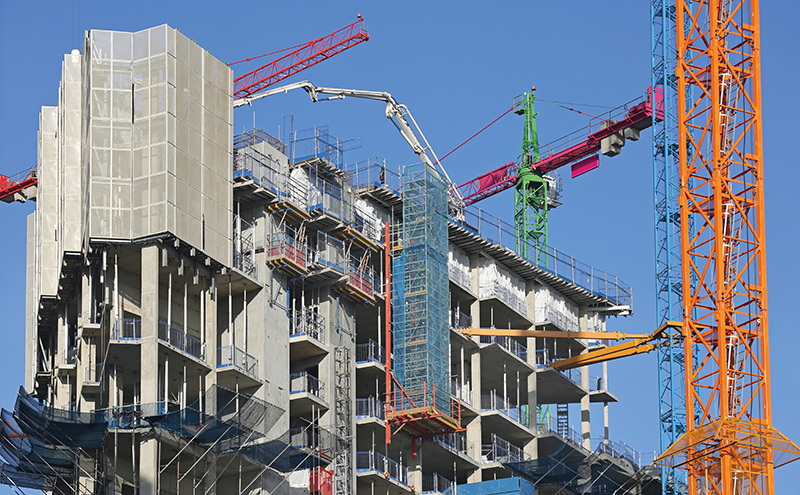 SITUATED amongst some of London’s iconic surroundings, such as the River Thames and the Millennium Dome, the Upper Riverside blocks will provide 1000 new homes in Greenwich Peninsula.

The large prism-like glass structures supported by concrete frames will boast views of the city’s eclectic skyline, providing a unique backdrop for residents looking out or those admiring the building from afar. Despite proving challenging in the making, the asymmetric structure of each block will enhance the Peninsula’s visual appeal on completion.

As the capital prepares for a relentless demand in high-rise buildings, the safety of workers and the time in which contractors are expected to hand over projects by are some of the pressing concerns which continue to pose tough challenges. Innovative solutions are sought fast and to a high standard.

For the construction of Upper Riverside No.1 and No.2, AJ Morrisroe (AJM) turned to PERI UK for a high quality access solution that would provide two secure access points leading to all floors.

The first phase of the project saw the installation of the PERI UP Rosett Flex Alu 75 access system, providing the required access on both sides of the structure. The system was designed to reach the projected height of the structure and was strengthened to hold the increasing dead load as the staircase was extended.

Although the stair tower was suitable for the job, the project’s cycle time demanded faster output. As a result, the access system started to pose problems for cladding contractors.

The PERI UP staircase is a permanent fixture, making it incompatible with the cladding process as it could only be removed once the concreting process had been completed. The obstruction caused by the staircase had a domino effect on the overall cycle time, delaying any progress on the lower floors. Modular components such as fit outs could not be installed as it was necessary to complete cladding in order to protect the interior from external elements.

This left AJM in a predicament as the access system was installed on both sides of the building; removal of the staircases would’ve interrupted the concreting process as there would be no means of access to the upper levels. A solution was required that would enable the operation of both processes to occur simultaneously in addition to freeing up space at ground level.

AJM and PERI worked collaboratively to implement a smart solution that would enable the continuation of both cladding and concreting, thus accelerating the cycle time of the project. Initially, AJM suggested installing a staircase which would suspend from the cured concrete slabs already in place, resembling a cantilever deck. Although this would’ve provided the required space for work to resume on the lower floors, it demanded trained operatives to extend the staircase as each floor was cast, again making inefficient use of time and money.

PERI’s product manager, Howard Ball, introduced the idea to the wider team at PERI where they managed to conceive AJM’s vision by combining two PERI products in the market. ‘‘We suggested integrating our PERI RCS Climbing formwork with the PERI UP access system as this enabled the stair tower to manoeuvre up the building with minimal change each time it was raised,” he explained. “This eased the pressure on labour whilst providing the required safety controls that are usually expected for a project on this scale. We were able to save our client time, which had a huge impact on the duration of the project.”

Suspended from cured concrete slabs, the system combined practicality with the client’s requirements to ultimately provide access to six levels at any one time, inclusive of the wet deck. Gaining swift access to the wet deck enabled contractors to start the rebaring process and pour the concrete accurately and safely. In addition, the lower levels of the structure were handed over to other contractors earlier than planned, enabling cladding, steelwork and fit-outs to take place.

The combined PERI system will now be installed on the construction of block 3, where it will accommodate for changes in slab profiles. Varying extension pieces can be fitted to each floor to meet the requirements of unique structural edges.

Tackling safety in the process

In the process of devising an efficient solution, safety controls evolved which reduced the amount of working at height.  The original PERI UP staircase involved erecting modular components as the building grew in height. In addition, as the staircase extended, further site space had to be isolated at ground level to ensure safe working.

Once again, this had a negative impact on the cycle time of the project. The solution removed the process of fixing components at height as the staircase was constructed at ground level and positioned into place via a crane. This reduced pressures of working at height to erect material, especially during adverse weather conditions. Labourers could resume work without needing to wait for access to be installed at each ascending level.

The system incorporated all the safety features that a project of this size would demand including handrails, toe-boards and netting to enhance safety controls at greater heights.

Keeping crane use to a minimum

The one off installation of the cantilever staircase meant that crane use was reduced to a minimum, where it was previously utilised to deliver modular components for the stair tower. This meant that the crane was then free to facilitate other tasks on site. The RCS system fitted with a hydraulic pump enabled the platform and staircase to climb from floor to floor at the same time, making the project less dependent on cranes to be in operation and still providing required access at any height. This was extremely beneficial considering the site’s close proximity to the River Thames as AJM had greater control in the event that the crane was winded off.

AJM’s senior construction manager Mick Carroll said, “We were able to continue the job without interrupting other people’s workspace, especially during times when the crane was unavailable. Setting up the system was a lot easier and quicker compared to traditional access systems we’ve used previously. I’m certain that the remaining blocks will also benefit from using this system.”