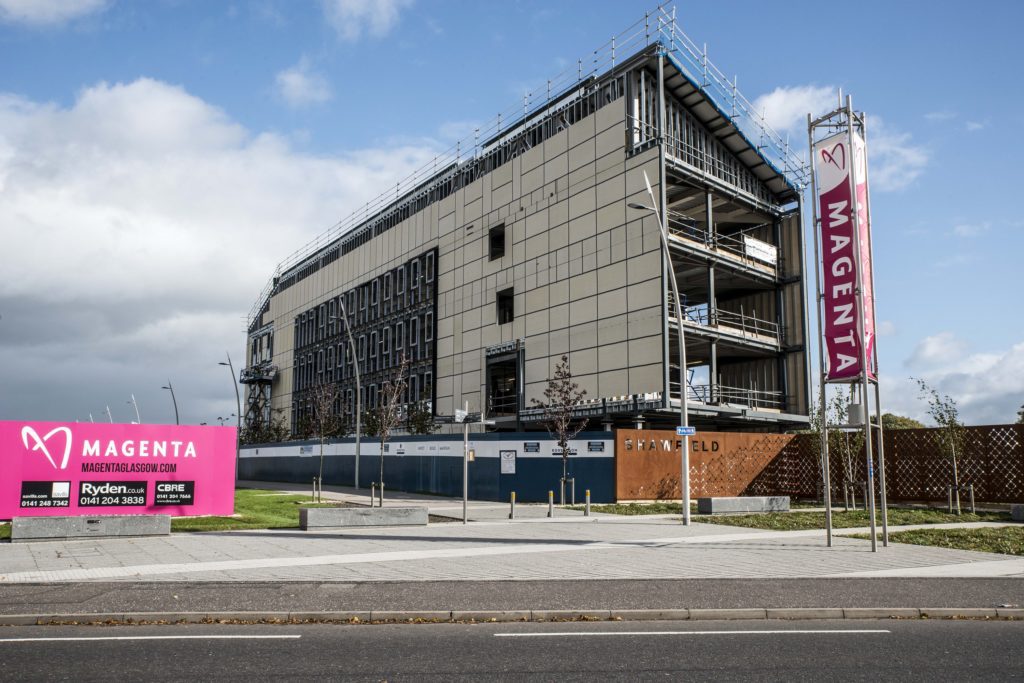 The first building at Glasgow’s new business park, Magenta @ Clyde Gateway, has been ‘topped out’.

The final piece of the £9 million Red Tree Magenta building has been installed. Currently under construction by contactors Robertson, it is due for completion in summer 2018 with investment funding proved jointly by Clyde Gateway, the Scottish Government and South Lanarkshire Council.

The four-storey 3,780 sq. m Red Tree building will provide Grade A business suites ranging in size from 10 to 168 sq. m, aimed at encouraging the growth of SMEs.

Located on the 27-acre former Shawfield industrial estate, Magenta @ Clyde Gateway is to bring an estimated 12,000 new jobs to the area.

Guy Marsden, director at development partner Highbridge Properties commented, “Topping out is a major construction milestone in what is a landmark project – the very first building at Magenta, which will eventually become one of the UK’s largest office locations.

“Magenta is a very compelling option for businesses who want great value for money, superb infrastructure, and a location that’s under two miles from the city centre, 15 minutes from Glasgow Airport, and two minutes from the M74. It’s also within walking and cycling distance of a growing local population, who are taking advantage of the various new residential developments that are springing up in the area. Magenta’s close proximity to the Cuningar Loop woodland park is also good news for the wellbeing of people who will be working here.

“Magenta provides a great addition to the Scottish economy – with Grade A office space that offers savings of up to 37 per cent on similar new-build offices in city centre locations.”

Ian Manson, chief executive of Clyde Gateway added, “This £9 million investment marks the beginning of what will be a remarkable and eye-catching regeneration of Shawfield. These offices are the third to be developed by Clyde Gateway under the Red Tree brand, with two already in place at Bridgeton and Rutherglen, but this is the first to involve a complete new-build.

“We’ve already attracted over 5,000 jobs to the Clyde Gateway area, and many of our tenant companies are from the creative, media and digital industries such as Think Publishing, Made Brave, Peebles Media and Cloud Cover IT. Our Red Tree developments have been really popular, so it’s great to see construction work coming on so well and we are on schedule for opening this flagship building in summer 2018.”