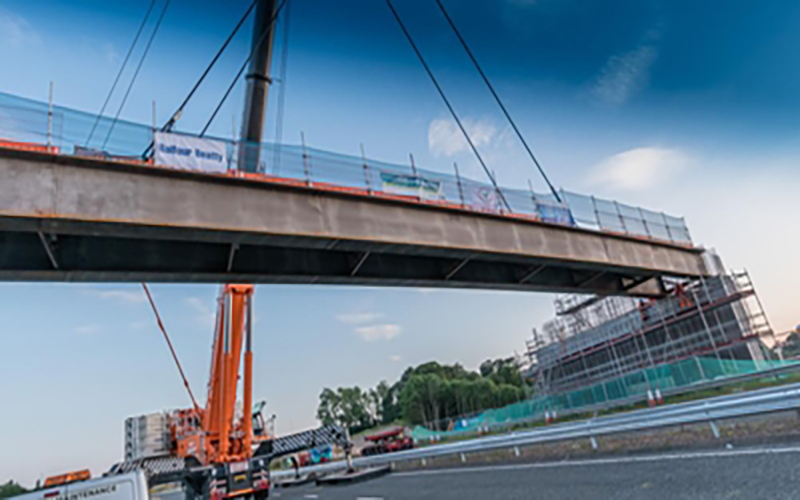 A milestone moment has been reached in the first phase of Balfour Beatty’s Perth Transport Futures project with the steel beams to support the new road bridge on the A9 dual carriageway now in place.

The contractor said its workforce worked through the night for three consecutive evenings to lift the three 103 tonne beams into place, ensuring “minimal disruption” to road users.

The work is being carried out on behalf of Perth and Kinross Council under the Scape National Civil Engineering and Infrastructure Framework. The plan is to create a new junction on the A9 along with a new link road to allow access to development land to the west of the city and support growth in the region.

Balfour Beatty said it has engaged with over 50 local suppliers and subcontractors on the project and provided work opportunities to ten residents, four of whom were long-term unemployed. All the steel has been sourced from British manufacturers, with over half originating in Scotland.

Hector Macaulay, Balfour Beatty’s regional managing director for Scotland said, “We are delighted to have reached this key milestone on the Perth Transport Futures project, and in doing so, to have made a significant contribution to the local economy and community. We appreciate the patience of the travelling public during this phase of the works and look forward to seeing further visible changes taking place over the coming months, providing Perth and Kinross Council with the vital infrastructure to enable their exciting regional growth plans.”

Councillor Colin Stewart, convener of environment, enterprise & infrastructure for Perth & Kinross Council added, “It is good to see that significant progress continues to be made with the A9/A85 junction improvements and new link road to Bertha Park. Now that the steel bridge beams are in place this project is really beginning to take shape.”