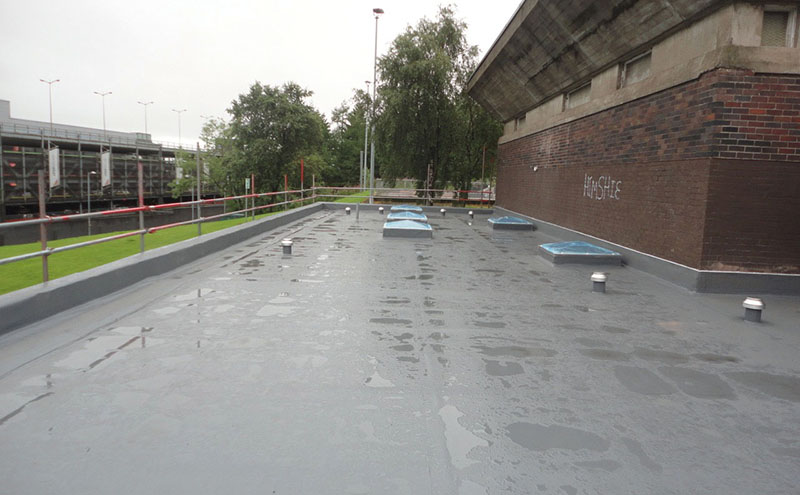 AN East Kilbride building that started life as a youth club over 50 years ago has been undergoing an extensive roof refurbishment.

Universal Connections East Kilbride, which was originally called The Key Youth Centre, was built in 1966 and was considered at the time as being somewhat futuristic.

As part of a revamp, the building now boasts a Protan vacuum system and Protan prefabricated membrane on the roofs.

Protan said that contractor Curtis Moore suggested the state of the roofs  required different treatment for each, in order to deliver the longevity the Council was looking for, and to minimise disruption as the building would remain open for the duration of the works. A combination of Protan’s prefabricated system on the higher roof and the vacuum system on the lower roof was decided upon.

Protan said, “The high roof has been stripped back to the rafters and a new plywood deck, vapour control layer, insulation and Protan SE 1.6mm prefabricated single ply membrane mechanically fixed across the plane.

“On the lower roof, Protan EX 1.6mm single ply in conjunction with Protan’s vacuum system has been used, overlaid on top of the existing concrete deck and bitumen felt. In addition, 11no. double skin polycarbonate rooflights from Brett Martin were integrated into the lower roof, delivered to site  pre-flashed with Protan membrane.”

Alex Moore, Curtis Moore’s operations director, added, “East Kilbride is a very windy and wet location, and The Key was remaining ‘live’ whilst the work was undertaken. In our opinion, using an adhered solution wasn’t suitable.

“With Protan’s vacuum system, the stronger the wind, the tighter the ‘grip’ the membrane has.

“Also, the higher level roof had few penetrations (the rooflights are on the lower roof) so Protan’s prefabricated option was the obvious choice, as it significantly reduces installation time, effort, and the noise from drilling and fixing activities; it also removes the potential for adhesive vapours to impact on the building’s users.”

Protan said it is the only single ply membrane manufacturer in Europe to have developed, and to offer, a vacuum system and a prefabricated option.

The firm added, “With Protan’s vacuum system, the membrane is loose-laid directly onto the roof, mechanically-fixed at the perimeter, and the Protan vacuum vents inserted across the roof plane.

“Air movement across the roof and through the vents creates suction, drawing air from between the membrane and airtight substrate below, causing the single ply to ‘stick’ to the roof.

“The stronger the wind, the more the membrane adheres to the roof structure. As the construction process avoids penetration of the support structure and vapour control layer, and requires an airtight base, the system can help achieve, or exceed, the requirements of Building Regulations Approved Document L.”