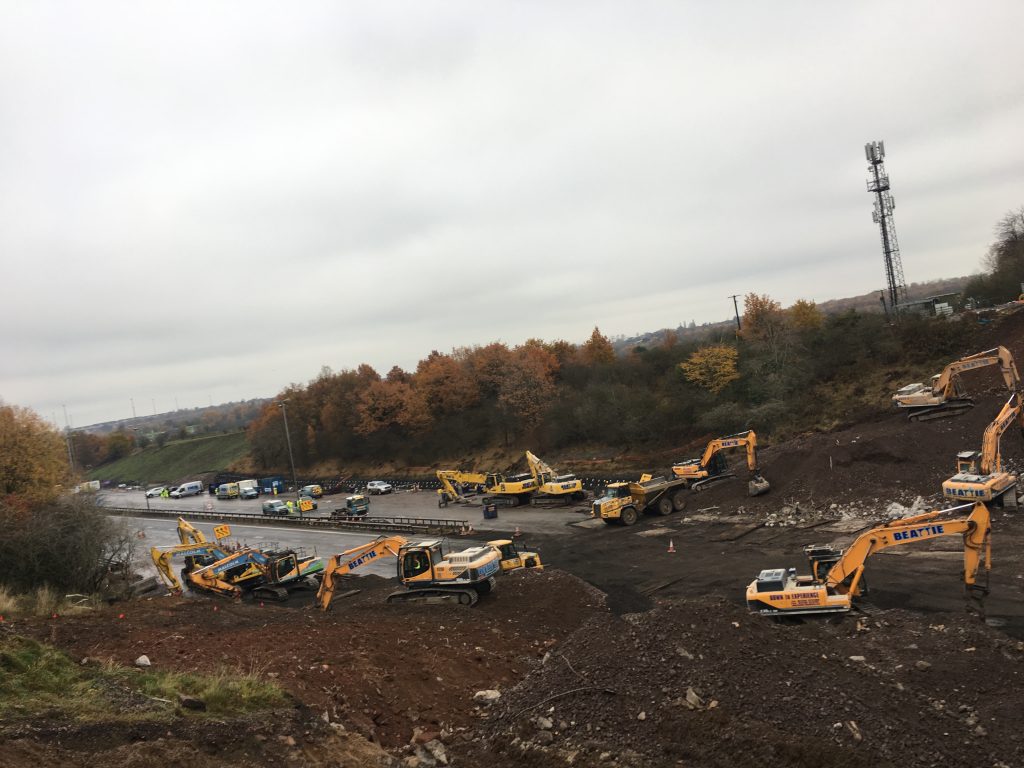 A section of the M74 motorway reopened six hours ahead of schedule on Sunday night, after demolition works closed the road over the weekend.

The M74, the main arterial route between Scotland and England, was closed to traffic in both directions to allow for the demolition of the Bothwell Park Road Bridge, north of junction 5 Raith, as part of the £500m M8 M73 M74 Motorway Improvements Project.

Works took 51 hours to complete and involved first laying protective material before two high-reach excavators on five metre high temporary platforms on each side of the bridge chipped away at the concrete on the central span. Seven smaller excavators were also used to demolish the outer spans.

The 12 metre high bridge was the final bridge to be demolished as part of the project.

Graeme Reid, Transport Scotland project manager for the M8 M73 M74 Motorway Improvements Project, commented, “This was the last of six bridges to be demolished as part of this essential project to improve Central Scotland’s motorway network, all of which were able to be carried out overnight. However, with no central pier to support each side of this structure, we had no option but to close the road for the weekend to ensure the safety of road users and our workforce.

“I’m delighted to report that the months of planning to bring down this bridge and the co-ordination of our many stakeholders, including Police Scotland, the emergency services and local authorities, has made for a highly successful operation, and I’d like to thank everyone involved for their efforts.

“Thanks must also go to the thousands of road users who listened to our advice and changed their travel plans over the weekend to avoid the area; without their help, we simply couldn’t have achieved such a successful outcome.”

The Scottish Road Partnership (SRP) is delivering the project on behalf of Transport Scotland.

Gabriel Valtueña-Ramos, general manager of SRP, added, “Our contractors Ferrovial Lagan Joint Venture and Amey worked round the clock to ensure the weekend demolition went as smoothly as possible, with 24 hour monitoring of the surrounding road network in place to minimise traffic disruption, and I’d like to thank all involved for contributing to the success of this complex and challenging operation.”