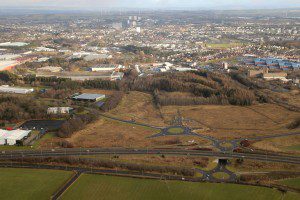 EAST Kilbride could benefit from a new £40 million retail and residential development if planning approval is obtained.

The proposals will see the “long-awaited” redevelopment of a long-term vacant site, which was acquired by LSIL from Tesco in 2015 after the supermarket chain decided not to build a store and garden centre as previously planned.

The development is expected to create over 250 new retail jobs, with further employment opportunities during the construction period.

LSIL has also submitted a Planning Permission in Principle (PPP) application for 98 new homes – a mix of flats and terraced, semi-detached and detached houses – on the same site.

The applications follow 12 weeks of consultation on the plans, including two public exhibition events which took place in January.

Bryan Wilson, Group Development Director at London & Scottish Investments said, “Our plans have been very well received during the consultation period, with local people in particular very happy to hear that something will finally be happening on this site, and that there could be new shops, homes and hundreds of new jobs in the pipeline.

“We are now in advanced discussions with major UK retailers who are interested in occupying the development and we hope to make announcements in the near future. We’ve also had significant interest in the residential side from a number of housebuilders and should be able to announce a preferred developer very soon.

“Subject to planning approval, we intend to start construction work on site in late Autumn 2016 with completion expected by late 2017.”