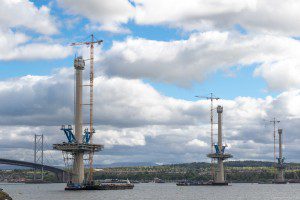 A construction worker has died following an incident on the Queensferry Crossing.
The 60-year-old man was reportedly working a spider crane when he was understood to have been hit by the moving boom on the deck of the north tower. His death is thought to be the first fatality at the site where work began in 2011.
Police Scotland confirmed a call was received around 12.20pm on Thursday April 28 and the man was pronounced dead a short time later.
A Police Scotland spokesman said, “We are currently working alongside our partner agencies to investigate an incident on the Queensferry Crossing Bridge that resulted in a man sustaining fatal injuries.
“Another man on the bridge also sustained minor injuries.
“Enquiries to establish the full circumstances surrounding this matter are ongoing.”
Construction union UCATT said the incident tragically highlighted the “ongoing dangers in the construction industry”.
Harry Frew, Regional Secretary for UCATT Scotland, said, “UCATT sends its sincere condolences to the family of the worker who has suffered this tragic accident. It is impossible to imagine how they must be feeling.
“UCATT will be doing everything it can to find out how and why this accident occurred and to ensure that similar fatalities are prevented in the future.”
Unite, the UK’s biggest union, has called for the Health and Safety Executive to conduct a “full and prompt” investigation into the incident.
Pat Rafferty, Unite’s Scottish Secretary, said,  “Our thoughts are with the deceased’s family to whom we offer our profound condolences.
“Once again, a loved one has gone to work and will not return home. That is hard to swallow any day but on today of all days, on international Workers’ Memorial Day, when we remember those who have perished at work, this loss is especially poignant.  We call on the Scottish Health and Safety Executive to thoroughly investigate what has happened here.”