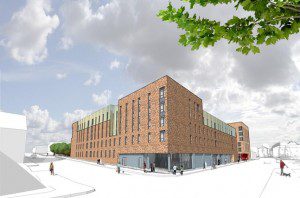 Balfour Beatty has announced that it has raised development finance for a student accommodation project in Glasgow.

The finance for the Kennedy Street project has been raised with Investec Bank and is the infrastructure group’s first project for the direct let market as a developer of student accommodation.

Balfour Beatty’s role as developer includes site purchase, planning, design, construction and operation of the scheme, along with the direct letting of the rooms and student management elements.

The development will feature 536 bedrooms, made up of 149 self-contained studios and 387 bedrooms, over two blocks around a central courtyard. Construction commenced in late 2015 and is due to be completed by July 2017.

“From our wide-ranging experience of working in this sector, we believe there is a good demand for high quality, purpose built cluster flats and studios in this part of Glasgow. The residences will be marketed direct to students later in the year and will be available for the September 2017 student intake.”

Mark Bladon at Investec Structured Property Finance added, “It is very rewarding to be supporting Balfour Beatty in this exciting new venture given it is the first time they are developing and directly letting a student block.

“We were attracted to work with Balfour Beatty given their size, profile and track record as a contractor. Notwithstanding signs of yield compression, we still like the student accommodation market and our appetite remains strong to provide stretched senior development finance for the right deals such as this.”