Home Comment It’s time to change the conversation on housing

Nicola Barclay has recently taken up the position of Chief Executive for housebuilding industry body Homes For Scotland, which represents some 200 organisations together delivering 95% of new homes built for sale as well as a significant proportion of affordable housing. With a career in the sector spanning over 20 years, Nicola is keen to change the conversation on housebuilding  and focus on meeting the diverse needs and aspirations of Scotland’s growing population.

In the first of a two-part interview, Project Scotland’s Fraser Rummens sat down with her to discuss her hopes for the future of Scottish housebuilding and ideas on how to tackle the nation’s current housing crisis. 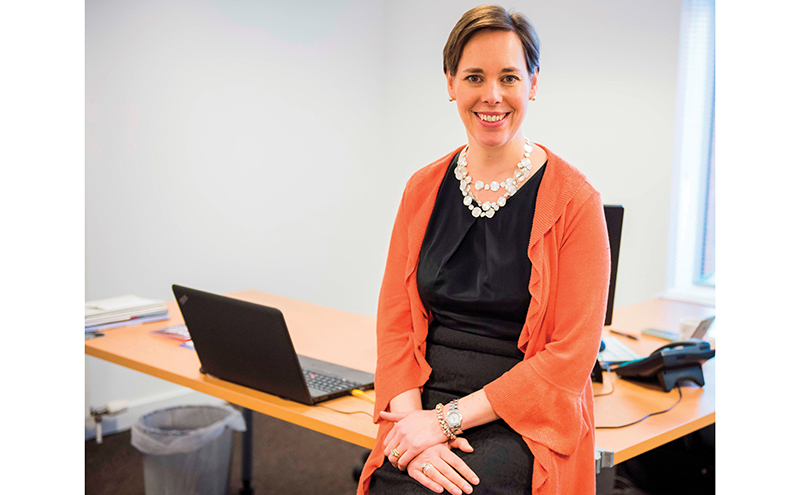 Q) WHAT do you aim to achieve during your tenure?
A) I’m following in the footsteps of very good chief execs who’ve set a really strong platform for me to work from so I’m not looking to radically change what we do as an organisation.
My main aim is to get housebuilding not just up the national political agenda, but for it also to be recognised as positive at a local level. You’re pretty much guaranteed to see an anti-development story every time you open a local newspaper so I want to try and change the conversation about housing and remind people of all the benefits it offers their communities and those who don’t have a home to call their own.
The NIMBY (Not In My Back Yard) lobby is generally very well organised and very loud.
This doesn’t just drown out the voices of our young people and growing families, what about the old lady on her own in a big house – all the family has left and she wants to move but stay local? How do we get all these stories heard? This is where I’m really keen to focus – the end occupiers.

Q) WHAT CAN BE DONE TO TACKLE THE HOUSING CRISIS?
A) With housing output still 40% below 2007 levels, we want a return to pre-recession volumes of at least 25,000 per annum by the end of the next Scottish Parliament. This would mean at least 100,000 new homes of all tenures.
We’ve set out the action we believe is necessary to achieve this in our manifesto which includes a national all-tenure target for increasing overall supply by an annual average of 10 per cent. We also need help to build industry capacity, especially with regard to assisting smaller builders, and the development of a “route map” on Building Standards with industry to ensure future changes are practical, costed and published well in advance of introduction.
But the whole housing sector has got to work together to deliver the homes we need so I’m particularly looking forward to working with the Charted Institute of Housing, Shelter and the Scottish Federation of Housing Associations. We may all be aiming at different parts of the market but we’re all trying to achieve very similar objectives.
There will obviously be some things we have a different viewpoint on which is understandable, but there’s much more which unites us.
The stronger we are as a collective, the greater the voices going into government, again nationally and locally, to make sure that the planning system is working, that any incentives coming out of government or any policy changes don’t cut across work that is being done.

Q) WHAT POINTS DO YOU ALL AGREE ON?
A) The need for more homes, the need for a planning system that operates far more effectively than it does at the moment, the need for utility providers to be engaged in the conversation earlier on, the need for more skills and training for all types of people that could work in the industry, the need to raise the profile of housing for school leavers and university graduates to persuade them it’s a good industry to come into, be it working out on site or working in an office –  it doesn’t really matter, we need a much greater volume of people coming through. Where’s the succession planning?

Q) WHAT CAN THE GOVERNMENT DO TO MEET SCOTLAND’S DIVERSE HOUSING NEEDS?
A) It can talk positively about housing in its broadest sense at every opportunity. There is a real fix on affordable housing coming out of this Government and fine, that’s their political agenda, but I’d like them to widen up that language far more to include homes of all tenures. I think that’s the key thing they can do and everything else is detail under that.

Q) What are your thoughts on the recent CITB research which stated that housebuilding will replace infrastructure as the key driver of growth in Scotland’s construction industry?
A) It’s  an opportunity. It’s whether the skills exist just now to maybe transfer from some of the larger infrastructure projects that are going to be finishing, such as the Forth Crossing. Without analysis, it’s hard to know whether we have a big enough supply of people to come across.
There are also opportunities for retraining. Maybe people coming out of the military, coming out of the oil and gas sector. We’ve got to try to be as nimble as we can to get people ready now to feed into the housebuilding programme.
Housebuilders, pre-recession, built nearly 25,000 houses. They found the staff in offices; they found the staff out on sites, so we know it can be done. And people will travel to work, especially site labour. We all know the guys going up to Aberdeen during the boom times up there for housebuilding when there was a recession in the central belt. I can see the reverse happening, people travel when they know there is work at the end of it.

Q) YOU HAVE CALLED FOR A RETURN TO PRE-RECESSION LEVELS OF CONSTRUCTION OF AROUND 25,000 NEW HOMES PER ANNUM. HOW DO YOU SUGGEST THIS IS ACHIEVED?
A) I think a lot can be done through the planning system. We’ve been heavily involved in looking at the planning review and suggesting ways of streamlining it so things come through the system a lot quicker. They should still be rigorously tested to make sure they are in the right location and with good quality design, etc. but there are certainly ways we could do that faster and more efficiently. I think with local authority cuts they might find that they have to do that anyway because they don’t have bodies within departments to take the time. They’re just going to have to find more creative, innovative mechanisms to get things through the system quickly.
We need the entire local authority to work together and to have an attitude of ‘Yes, we want to deliver these extra homes in our area’ so that the roads engineer is in agreement with the planners very early on, the education officers agree very early on how many school places are needed and therefore how it is going to be funded.
At the moment, there is quite a silo culture in many local authorities where they don’t have that early engagement together when they’re deciding where the houses are going to be built within their area over the next ten years. They wait until the applications come in and it sows a very reactionary style of planning.
But it comes down to having that culture within a local authority where they say ‘Yes, we welcome more houses here’, and that’s an enormous stumbling block in a lot of places.

Q) WHY DO YOU THINK THEY ARE RELUCTANT?
A) I don’t think it’s the officials within the local authorities so much as local political pressure put on them by constituents who don’t want more houses, don’t think the roads can cope with any more cars, and the schools are full.
So, unless they look at it holistically and go ‘Ok, we’re going to have more housing and we’re going to need a school and we’re going to have to do this road network,’ but they’ve got to lead and I think you’ll find the councils who have got strong leaders are the ones where you see a lot of housebuilding going on.
Dundee is a classic example of really good, strong leadership within the council and all the stuff they’re doing at the waterfront, it’s not housing related but it’s the same ambition for their place, and that’s what we need – ambition from leaders, be it the chief exec or political leader or convener.

Part two of our exclusive interview with Nicola Barclay will feature in the April issue of Project Scotland.